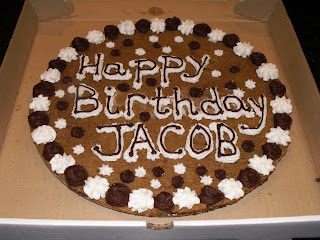 That was March 4 in case anyone was wondering, you know, since I am very untimely these days with the birthday posts and, well, any other posts for that matter.

How did he get to be NINE?

I swear he was just FIVE.

This year to avoid the RSVP chaos, we decided to scrap the birthday party in favor of inviting one friend to go bowling and eat pizza and ride the rides at Kemah.

Until my sweet boy, so used to being the one left out, did not want to leave anyone out and instead requested a sleepover with all the kids in his class. It was difficult explaining to him why we couldn't invite the girls, so eventually I just told him we only had room for five (FIVE? What was I thinking?) and told him the one girl he chose was busy that night.

So last Friday afternoon I picked up from school four little boys plus my own, fed them junk food, rented video games, and let them loose at the park and creek and began our very first slumber party.

Can you call them slumber parties with boys?

I have to be honest and tell you, I did not sleep much the few days leading up to this. Oh, I knew they'd stay up late and they'd eat too much junk food, that didn't bother me, it was the not knowing that did it. Not knowing if how the boys would react to Jacob for so many hours. Not knowing if the kids would clique up and exclude him in some way. Not knowing if his excitement would override the extra afternoon pill and frighten the kids into calling for a ride home.

But I didn't have to be.

The boys played Legos and Wii and went fishing at the pond. They ate Cheetos and Oreos and laughed the whole time. No one fought over who had to sit by Jacob. No one complained about being on his team when they played ball. No one left him hiding when they played hide and seek. No one ran off and left him in the dust when they raced to the creek.

I have the best picture in my mind, not having my camera at that moment, I will try to share. It is of all four boys after clinking *cheers* with their soda cans sitting on the driveway with their arms around each other talking about their secret club.

On his ninth birthday, my child fit in.

And as surprising as it was to me, it wasn't to him. These are school buds. They get him. Understand him. Like him.

I can't believe I ever had doubts. 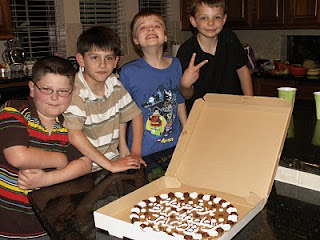 His face says it all. The sleepover was a huge success. 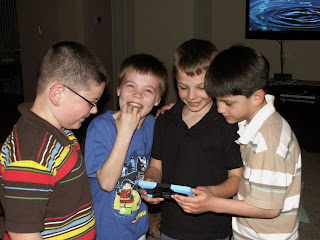 The next day, after everyone left, he remembered one of the boys had given him a card that he stuffed in his backpack and opened it. It had twenty dollars in it, but that wasn't the best part. The boy signed his name in his nicest handwriting and after that he wrote....

THAT. Was the best part.