Remember last time when Jacob ruined our snow day by peeing on the bathroom rug?

Yeah, I may have been wrong with that.  (And I did apologize.)

Turns out it really could've been cat pee.  Who knew?

Not me, that's for sure.

Ten days later I was all like, "What's up with all this people pee in front of every toilet (four) in the house?  Who did this?  I am looking at ya'll boys (and man)? "  And then I saw my cat exit one of those bathrooms and was all like, uh-oh.

So I googled and guess what?  Cat pee that does not smell like cat pee means said cats kidneys are failing.

But she didn't seem different.

She was still jumping onto the counters.  And the beds.  And racing Adam across the house.   She didn't seem sick to me.    Surely this was a fluke and maybe the litter box is too dirty or the kids have too many shoes/dirty clothes/toys blocking it.   Yeah, that had to be it, because she sat right next to me on the chair arm while I was googling all this strange information.

That was Friday afternoon.

Saturday morning she was dead.

Overnight she got worse.  She would jump up onto the bathroom counter but fall into the tub.  She wouldn't try to get up.  She slept in the bed with me and two of the kids but she didn't sleep much.  She paced a lot and then she curled up with each of us for extended amounts of time.  She always curls up with us, but then she gets down to go to her bed: 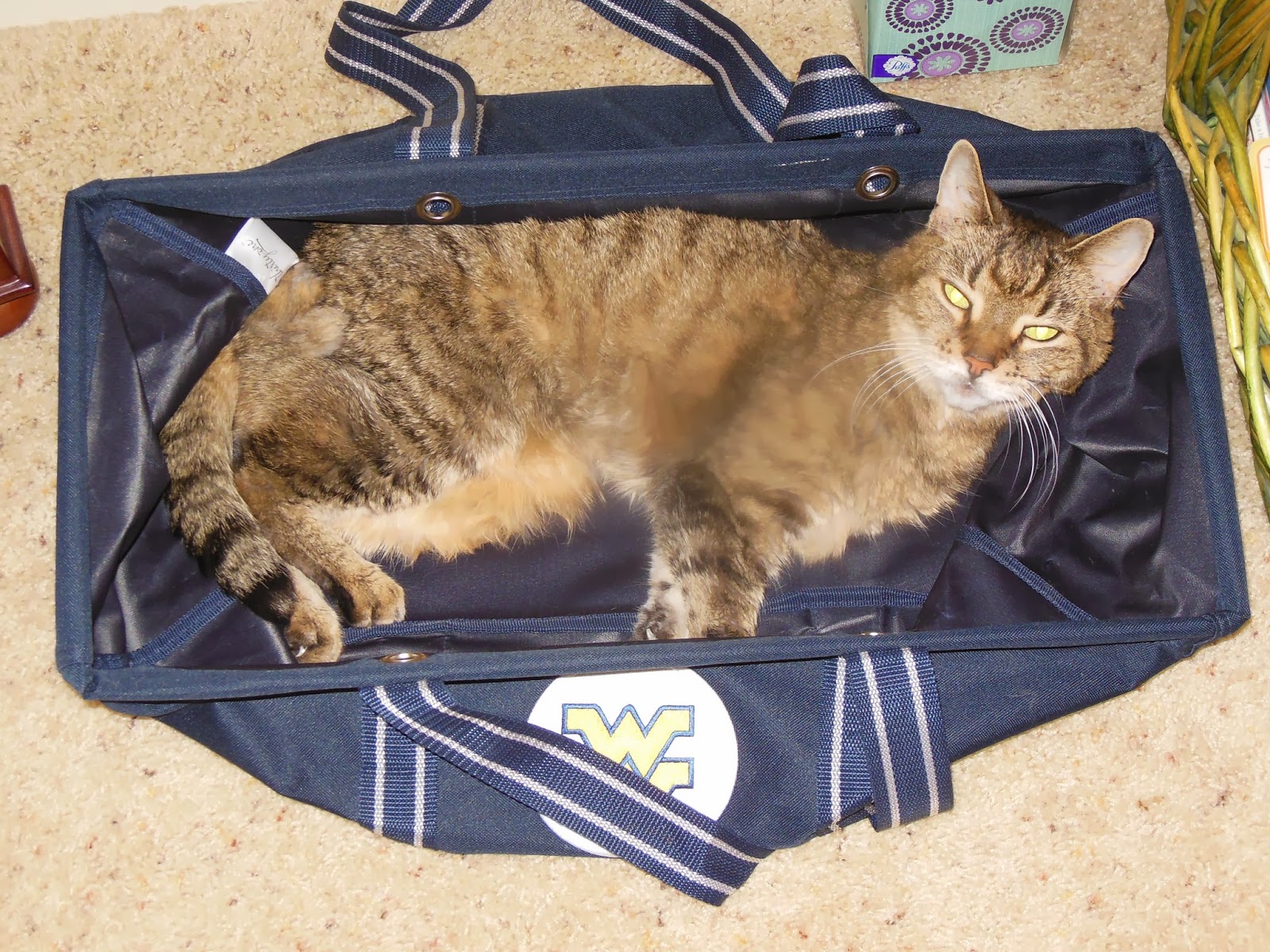 She never went to her bed that night. 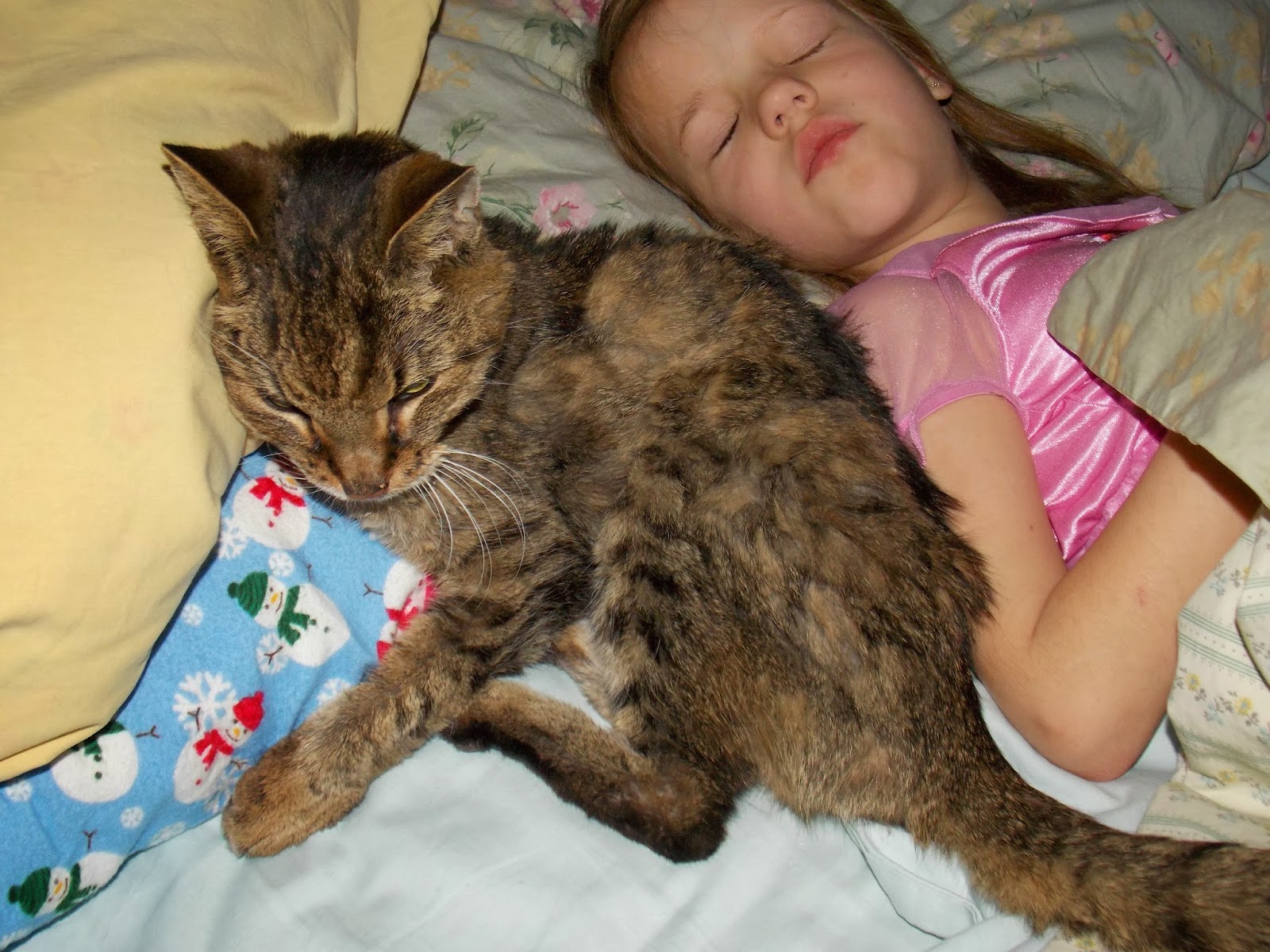 (See how pitiful.  She was not doing well)

The next morning she was stumbly.   Derick said she probably had an ear infection and was taking her to the vet.  He'd be back with antibiotics and she'd feel better he said.  You stay home and take a bath and read your book and don't you worry about her.

He called me half hour later and said I had to come.

So the kids and I went.

He gums were gray.  They are supposed to be pink.

We cried.   The vet left.   We cried some more.   We passed her around and gave her kisses and she snuggled us the best she could.   She tried so hard to get up and be with Elizabeth who was in a ball in a corner.    Of all the kids she tolerated Elizabeth the most. 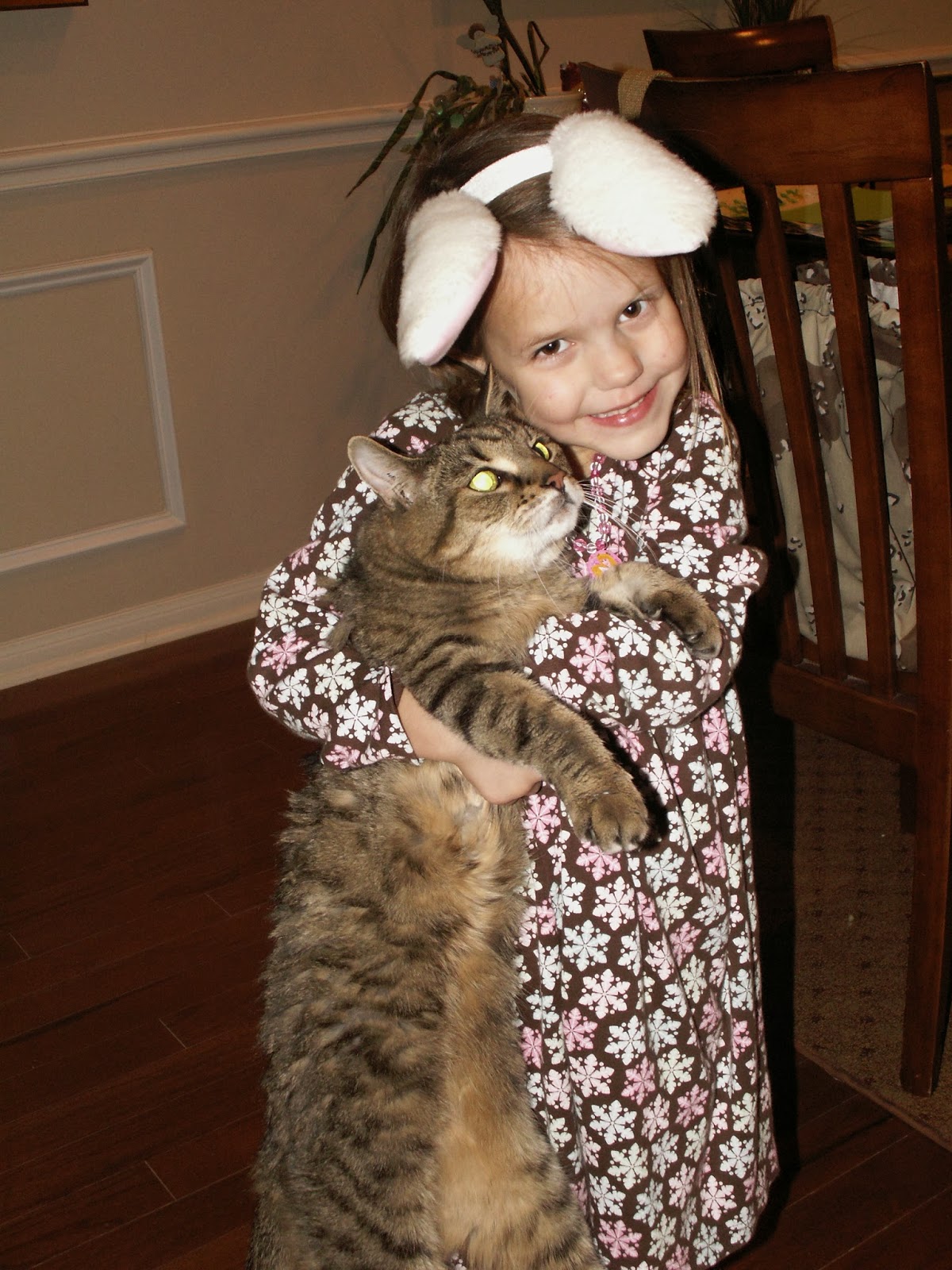 The vet came back and said we could take her home but she wouldn't last much longer.   Phoebe hated the carrier so I couldn't put her back in it again.  I looked at her and could tell she was done.   She needed peace.   We needed peace.   I couldn't continue to do that to my hysterical children.   So we kissed her and hugged her and sat with her until the sedative took effect and then scared all the people in the waiting room as we attempted to get to our cars and make it home with an empty cage.

I had that cat for 19 years.   I got her as a kitten at a pet store in a Virginia Beach mall for $30.  I didn't go there shopping for a pet, but I saw her in a cage outside the store as I walked past and for whatever reason decided I needed her right then and there.  They put her in a cardboard box of which she promptly escaped and attached her long sharp claws to my head and neck.   I somehow made it through a Wendys drive thru and then home and released her into her new home.   I unpacked my meal at the coffee table (where I always ate as a single yuppie) and she immediately raced over and stole the bacon from my sandwich.   Then she came back for fries.

I named her Sara to begin with because that was my favorite name at the time.   She was not a Sara.  Three days later she was Phoebe Figalilly because I loved to watch The Nanny and the Professor when I was young.

She was good company the next two years as I lived alone.  She greeted me at the door when I returned from work.  She would fetch furry play mice and we'd play that game for hours.   She loved to run and roll into the coupon cutting trash every Sunday morning.  She loved to jitter at the birds outside the glass door.   She would sit on the edge of the tub while I showered or bathed and she always slept on the extra pillow I kept beside my head.

I have been with her longer than anyone else in this house.   Being a cat, she was not all up in my face like Ezra.  She didn't love everyone she saw, she was not a dog.    My dad would always tell everyone to stay away from her that she was a cranky old cat who didn't want to be messed with, not like his Mimi, his version of the-best-cat-ever, but he would end by saying, she does love Andria.  Andria is the only one she'll deal with.   And for a long time he was right.   She eventually warmed up to Derick and would wait for him at the door with fake furry mice too until he brought Ezra home and broke her heart.   She was always good to the boys in the sense that she never hurt them, but she didn't hang out with them much.  I think Jacob's months-o-colic scared her and Adam was scared of her so she stayed away.  When we brought Elizabeth home she was lying in the crib with her two hours later.  I said she must have sensed there was another girl in the house. 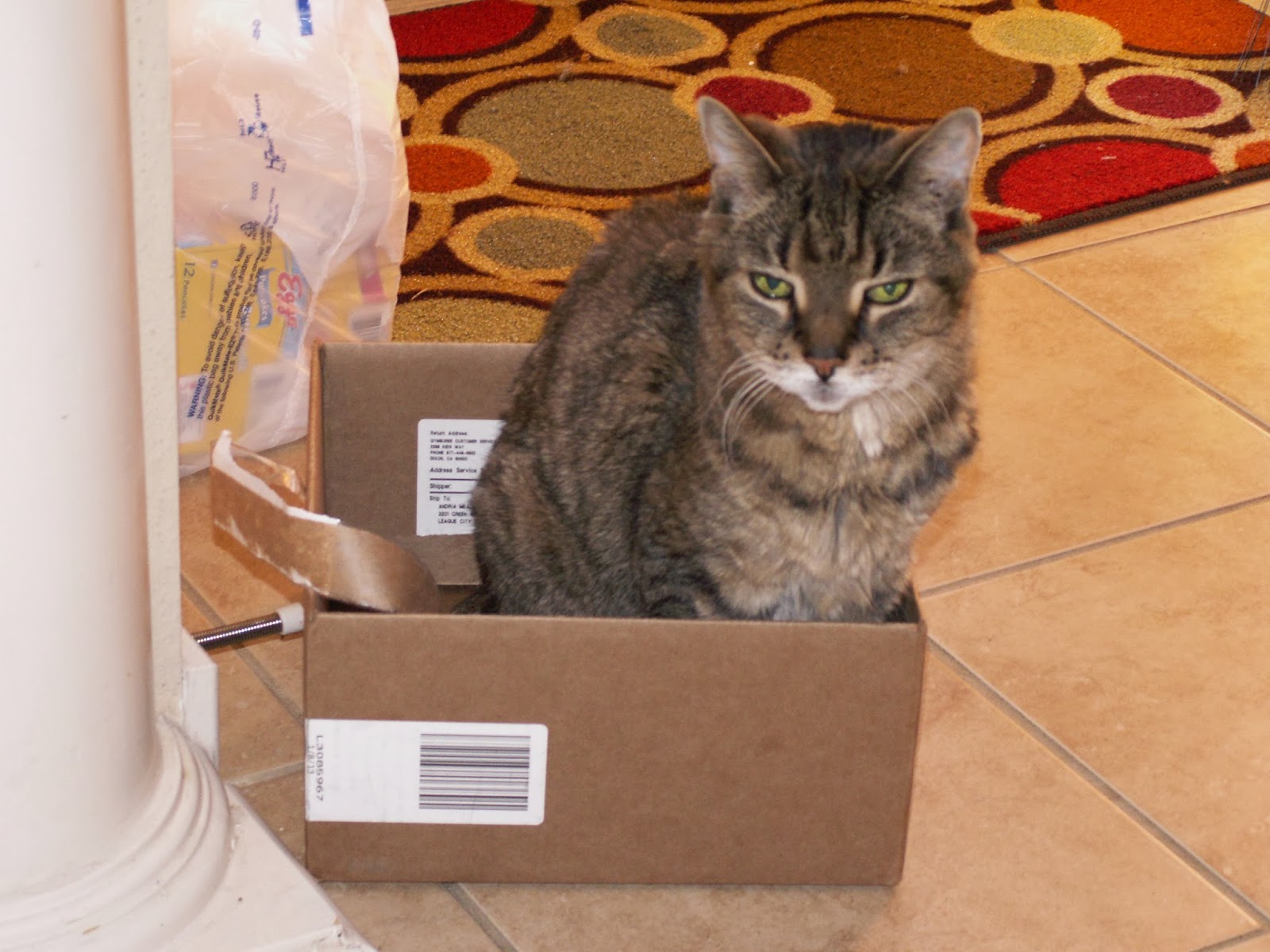 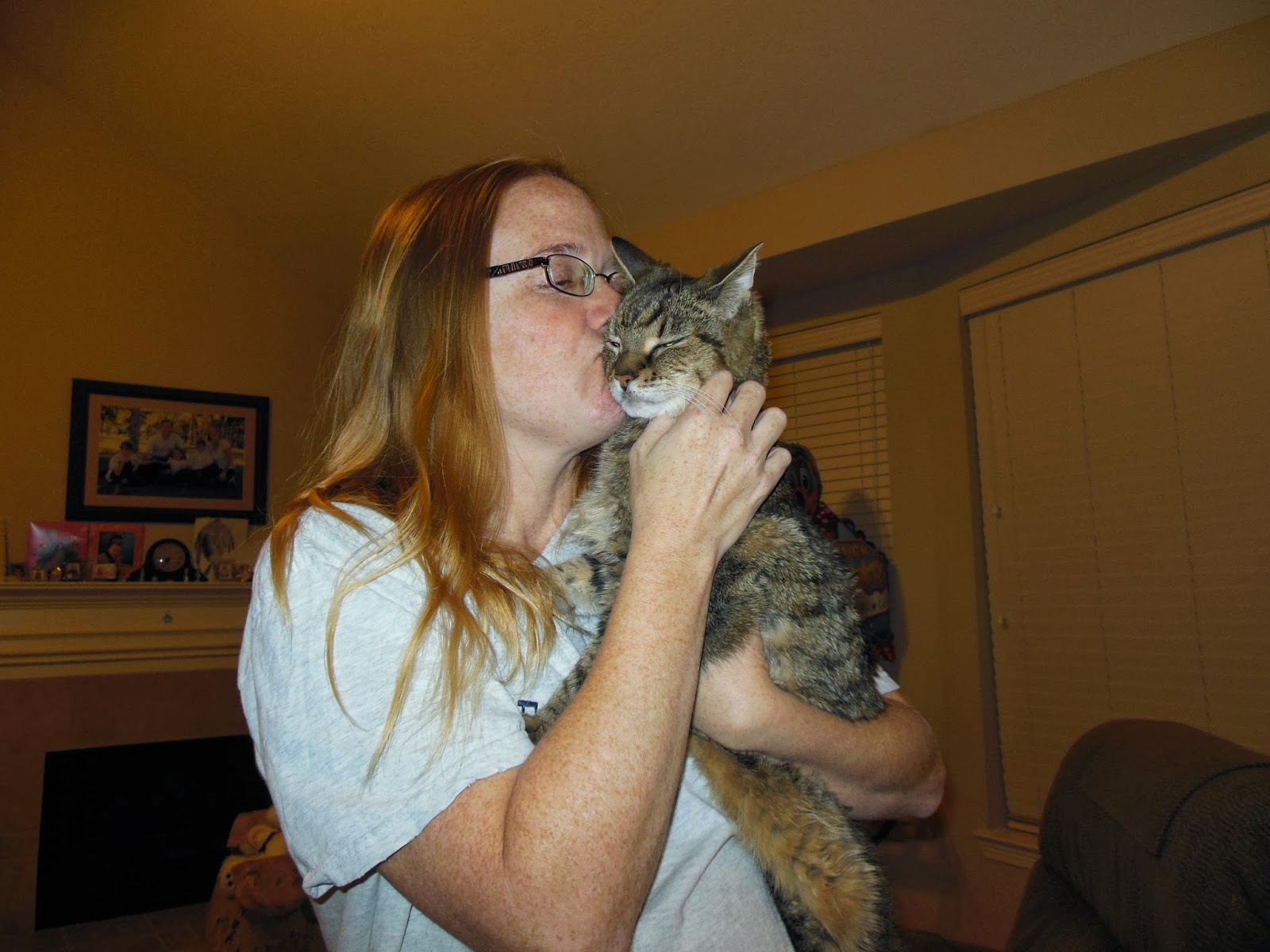