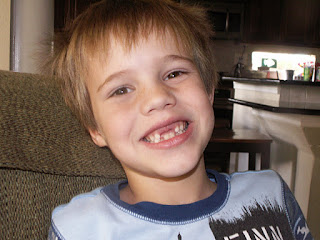 I cannot believe you are SEVEN! I think I blinked and you grew up. Weren't you just a baby yesterday?

You are still my sweet little tiny, but you've changed some. You read very well and can add and subtract and you have the most beautiful cursive handwriting I've ever seen. Your favorite thing to do right now is draw. Our house is filled with pictures you've hung up everywhere. I love to see them, although it makes your dad mad when you use glue to hang them. Tape is a better choice, son. Most of the pictures are of Ben 10 and his various cohorts, but there's a few of you and me and a few more of you and Elizabeth.

Which, speaking of, Elizabeth is still your favorite person. Oh, you tell me I am your favorite person, but I just smile and nod and know you are saying it to make me happy. You and Elizabeth are two peas in a pod. If she likes something, you like it too, regardless of the fact that it might be an entirely female entity. If she wants to paint toenails, you do too, you just don't want all your friends to find out about it. You like to read stories to her and she enjoys listening. Nothing warms my heart more than seeing you give her a huge hug each and every time the teacher loads you into the car after school. You have always adored her and time has not changed that. She is truly your favorite and I am okay with that. 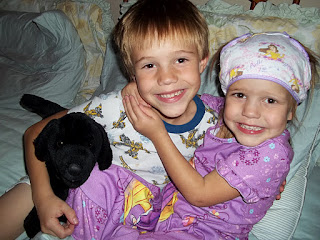 Your favorite color is blue, your favorite shows are Wild Kratts and Ben 10, you like dinosaurs and Cars, and your favorite food is spaghetti, but only with Gammy's homemade takes-six-hours-to-cook sauce. You want oreos and nutella sandwiches in your lunch and you like pizza Wednesdays at school. You play a lot with Roddy and Cade down the street and I like that they are in your class too, although, I am sure your teacher does not.

School is not your favorite place. Going half-day last year was fine, but all day long, well, is a waste of valuable play time to you. You'd rather come home before lunch and play with Elizabeth all afternoon but, alas, this is what life becomes as you continue to grow. I think you have realized that it's not going to change and you've been doing better, but the teacher said you can still be swayed if someone thinks you're funny. I think class clown was tossed around in our last conversation. Well, you are pretty funny.

I remember the day you were born and you honest and truly smiled right at me. Your dad saw it too so I have a witness, although no one believes either one of us, but we know you did and it wasn't just gas either. You are a happy little dude and always have been. If things don't go just your way, you figure out another way. You usually don't get too bent out of shape over things and I hope you stay this way. It's a good way to be.

We went to a movie (Puss in Boots) yesterday and you sat in my lap the entire time. I savored every moment even though my legs were so asleep I couldn't get up when it was over. I know one day you won't fit there and you won't want to fit there and one day you'll lose your sweet baby Adam smell right behind your ear the same way your brother did, but for yesterday I held my sweet little tiny with his dangly legs and pointy elbows and remembered what was and what I still have and it was a wonderful day.

My blog is broken. Or so I'm told.

Where did all those posts go? ;)

Oh, two kids with homework, a house to clean, a job to work.....oh, how I miss my early mommy days when I thought I was so bored. What I wouldn't give.....

There's so much to say and so little time. Where do I begin?

I guess we'll talk about Jacob this week. K?

Guess what? Seems there is a shortage of ADHD medications. I wasn't able to fill the latest prescription although I travelled miles and miles to find it. They just aren't making it. The good news about this is, so far, only the four hour override morning pill is affected. I do still have 26 pills leftover that I am hoarding for school days, so although the weekends are rough, at least he's not acting crazy at school. Yet. I am praying they don't stop making his patch by the time we need it refilled in March. Me oh my, that would be a problem.

The first nine weeks of school, Jacob failed math, language, and history. We were told by the psychologist that he would always need help with math, but he failed the other two out of pure laziness. He refused to do any homework, wadded his school work into his desk, and just pretty much clocked out. His explanaation: I'm a kid, I shouldn't have to do all this work. Grrrrr. And we're paying 500 bucks a month for that. Yeah.

Seriously, I really just wanted to yank him out of that school and drop him off at the public school and be done with it, but we were paid up through December with no refunds. So....this last nine weeks was spent three to four hours a night at the dining room table doing and redoing homework and schoolwork and studying like I haven't done since those late nights in college. Another reason there wasn't much blogging this fall. I got lots of resistance and lots of grumbling and so much this-isn't-fair-I'm-just-a-kid-I-hate-you-so-much, but this report card he got a B in language, an A in history, and, eh, a D in math, but at least it was a bit of an improvement. If there hadn't been, he was heading to our public school. I mean, gah, I'm not going to keep paying for him to lounge when he can do it down the street for free. Of course, now he thinks he's off the hook, and as much as I'd love to have those afernoon hours again, we have to keep working. It's just getting harder.

Our plan has always been to send Jacob to the local middle school in sixth grade (next year). Elizabeth starts kindergarten this fall (hold me) and there is no way in hell we can afford three private school tuitions. None. The psychologist believes he should also go there and be enrolled in the special education program, which, I just don't know. More about that later. Anyway, I've met with Jacob's teacher three times and she has practically begged me not to do that. She doesn't think he'll be able to navigate the changing of classes at a school at least ten times the size he's in now. She's afraid he'll be physically bullied and lost in the shuffle with the thirty pupil classrooms. She has even offered to help me get a job there next year so we wouldn't have to pay. I just don't really know what to do. My husband, of course, wants to stick to our original plan because, well, money. I want to at least try the public school because, well, art and computers and robotics and swim teams and...and...and...well, is it a better place for him? How will we know if we don't try? The only problem with that is if pull him out of the private school he loses his spot and there is already a waitlist. What if turns out to be a horrible situation? I mean, what would we do then?

We have to decide by mid-February. That's not much time. When he's screaming and yelling and complaining about school I've already pulled him out in my mind, but every other time I am worried. Stressed. Afraid of making the wrong decision. Afraid of making things worse. Afraid of one day having a deranged teenager crash into his school to open fire on his classmates.