At the neighborhood school. 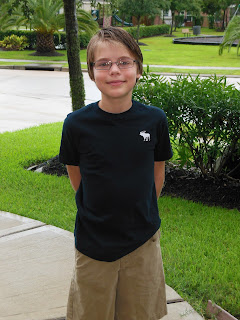 *No pictures at the school because, apparently, that is very uncool when you are in seventh grade.*

It is going well.   He enjoys changing classes.   He figured out his locker.   He gets to go to art every day.    He made a friend.   He is failing math right now, but to be honest, I am still all about the friend.

Jacob is twelve years old and until now he has never had a friend.

Oh, we've had kids over for playdates and birthday parties and some of them were semi-sorta nice to him at times, but they weren't friends-friends.  They came because their mamas brought them or there was a bouncy house in the yard but then forgot all about him come Monday morning.

Last night, a kid called and invited him over.  Not his mama, the kid (although being the good mama I am,  I did speak with the mama ;).   So that is what we are doing today.

We went to open house a few nights ago and as soon as we walked in the door a child was yelling for Jacob to come over.  And he did.   As we processed through the classes, different kids would approach him to say "hey" or he'd just leave us altogether to sit with one.   The teachers high-fived him.  One gave him a hug.  He took his siblings to the library and showed them the cool places to sit and the magazines you can read during lunch.  You know, if you don't want to go to lunch and sit by yourself, but he doesn't have to do that because he sits with his friends at lunch.

It took all I had not to sob right there in front of them all.

This never happened at the Christian school.    It hurts just to type that.   Christian school should have been the more likely place for him to feel excepted don't you think?   Very interesting turn of events.

It has only been two weeks, I know.   This blissful period of newness will wane and things may not always be this rosy, it is junior high after all, but just knowing that now he fits in a little, has others to support him, and enjoys what he's doing makes me sleep so much better at night.  You know, except when I'm awake kicking myself for not doing this sooner.