Elizabeth has been a Disney Princess fan since she was a baby.

Her mother has been a fan even longer.

My sister and I loved Beauty and the Beast!  We saw it five times in the theater and got our VHS copy as soon as it was available.  We even decorated our apartments with Belle picture frames and knick-knacks.   She is still our favorite.

Since the first time I'd ever heard of Bibbidi Bobbidi Boutique, I knew I'd take my daughter there.   Of all the things Elizabeth has enjoyed in her short lifetime, the Disney Princesses have been around the longest.  We watch all of the movies and play with all of the dolls and every night we read a book involving her favorite princess of that moment, which they have all been her favorite at one time or another.   I love them all too, but still, Belle is my favorite.

For six months we anticipated this day.  I always imagined sunny skies and warm weather, but alas, it was pouring rain and cool temperatures.  It would have been the best day of the week to sleep in and skip the parks, but no, we had an 8 am appointment that we couldn't reschedule.    While the boys rode Big Thunder Mountain and some Stitch ride that Derick is still complaining about, Elizabeth began her transformation.   I bawled my head off.

I was sure she'd choose Ariel as she usually reigns as Queen Favorite most of the time.  Merida has been inching up there recently too, but she wasn't one of the choices.  Most of the little girls I know have selected Jasmine, what with the jinglies hanging off the belly-baring costume and CUTE shoes (all the other girls there when we were there were Jasmine).  Elizabeth chose Belle.

I told her she needed to choose her favorite, not mine, and held out the Ariel dress which she shooed away.  I asked her why she wanted to be Belle and she said to me:   "Mom.  Belle loves to read and she is smart.  I love to read and I am smart.  I have to be Belle."  And so she was Belle.

Two days in a row.   It was wonderful.   The sun shone bright through that yellow costume even under ten dollar rain ponchos and plastic bonnets.   The weather was terrible, but the day was wonderful.

I cried happy tears through the entire appointment.   I love my boys with all my heart, but I know we'd have walked right past that place if Elizabeth were never born.  I probably would have never known it existed and would never have known what I was missing and that would have been allright, but being able to share Belle and all I love about her with my a little person who understands why I love her too, just filled my heart with such joy I could not contain it.

I do love Belle.  I love my own little Princess Belle even more.  She is more beautiful than I ever imagined. 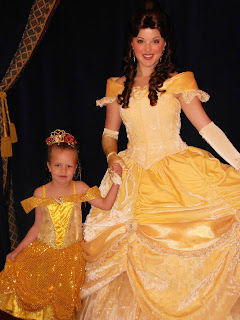 Still worried about autism and vaccines?

Still worried about autism and vaccines?

I saw this today.  You don't really need to click it.  I am sure you've seen this before.  Many times even.

Since no one really reads my blog anymore, I think it's safe for me to give my opinion on this without a ton of snarky comments, although, snark away, you're entitled to your opinion as much as I am.

Do I think vaccines cause autism?  Yes.  Maybe.  In some cases.

Do I think autism is only caused by vaccines?  No.

Jacob has been seen by four different evaluators over the course of his life.  Three of them say he has ADHD/ODD/auditory processing disorder/anxiety/depression.  Yes.  ALL OF THEM.  One says he has Aspergers Syndrome, which is on the autism spectrum.

Do I think Jacob has Aspergers?  As the years progress....yes, yes I do.

Of course, it doesn't matter what label you give him, Jacob is Jacob.  He does what he does and lives how he lives just the same as a non-labeled child.  It is what it is.

Do I think his "autism" was caused by vaccines?   Well, sometimes.

Here's my vaccine story:  Click next blog if I've said this before.

I was pregnant.   Felt fetus move at thirteen weeks (yes, really).   Fetus did not stop moving except for very, very short spurts until he was born at 31 weeks.    Baby stayed in hospital for a month but was a hearty little soul, moving, moving from the very beginning.   The nurses joked that he had ADHD even then.  I was just grateful he was alive.

As a baby, he slept very little.  He cried incessantly.  The only thing that provoked quiet was to keep him constantly moving.  He loved being strolled around the mall.  His little head was constantly looking around for something different to look at.  He became a happier baby once he could crawl, walking even better.  I am serious when I say he walked one day and learned to run the next.  The relatives joked that he had ADHD even then.  I was too sleep-deprived to give it much thought.  Then.

Jacob stayed up to date on all his vaccinations even though I would grill the pediatrician every time about her opinion on the autism debate and she assured me he would be fine.  I elected to postpone his MMR until 18 months and the varicella until 3 and she was sorta kinda okay with that.  I am sure I read somewhere that those shouldn't be taken together or something.

So Jacob got his MMR vaccine at 18 months.  On the nose.  In hindsight, that's not a very nice thing to do to a kid on his half birthday, but so be it.  He ran a slight fever the night of and the afternoon after but otherwise seemed fine.  Seven days later to the hour he started getting more restless than usual.  He started screaming again.  He wouldn't stop.    He wouldn't eat, he definitely wouldn't sleep and his temperature spiked to 104.7 when I called the pediatrician.  He was my first child, I took everything she said as gospel because, well, she went to medical school I didn't.  The on call nurse took the message and then the doctor called back to tell my husband (who by then was home) that it sounded like reaction to the shot.  Everything I found online and even the little pamphlet they gave me about it said if that were to occur it would be a week later.  She did not seem concerned at all and just told us to tylenol/advil dose him and keep cool compresses on him he would be allright.  Should I have brought him to the ER?  Yes, I probably should have, but we spent the next 24 hours jiggling and patting and cool-bathing and eventually he got better.  Sort of.

You know I was looking for the head-banging, loss of verbal skills, lack of eye contact that everyone says to be aware of, but I didn't get that.  I did, however, get a strange aversion to going outside.  My weekly mall trip that previously made him so happy (and me too, you know, retail therapy), now provoked full out tantrums.  If someone looked at him he'd scream.   He had the bluest eyes and, yes, I am biased, but he was beautiful.  Someone was always speaking to him.  He was always screaming.   Of course, he was pushing two and I thought, well, the terrible twos.  He doesn't have autism because he's not drooling and in a trance and oh, boy is he talking.  Talking all the time, but usually only about Thomas the Tank Engine.  And Percy.  And James.  And that God forsaken bee.  Buzz, buzz, buzz.  He could recite all the episodes by heart all day long and act them out on the trains I continued to buy because, oh no, he doesn't have autism, he's just really smart.  And he loves trains.  How freaking cute is that?

So to summarize:  My kid got the MMR vaccine.  He had a strange reaction and then started acting differently.  Do I think the vaccine did something to my kid?  Yes.  I kind of do.  I have no proof and I don't want to sue anyone or raise a stink about it because it could just be this was going to happen anyway.   I do believe he was ADHD in the womb, nothing caused that, and maybe his quirks are just a part of that?  I don't know.  One of his evaluators believes he would have always had the ADHD, the prematurity was what exacerbated his situation.  I agree with that.  Sort of.

I do know that my other children did not get the MMR vaccine until they were four and they are "normal".  Of course they also were full-term infants and neither of them visibly moved in my womb 23 hours a day.

Yes, I think vaccines contribute to autism, but I don't think autism is caused solely by them.  I think there are other factors at play that researchers don't know enough about.

You are free to disagree, but you can't change my mind.