Adam was supposed to spend this week with his grandparents.

Although this week has been crossed out for him for months, his summer school class cancelled for this week and the soccer camp he was going to attend scrapped because it interfered, he still isn't going to spend the week with his grandparents as planned.

Abigail, my neice, will be spending this week with the grandparents instead.

I love having my sister and her daughter so close I can see them every weekend . It's just...well....I don't like my neice very much.

Oh, I love her. She's family. I can take her in very short increments, but when she's here for hours and hours I want to claw my eyes my out and run screaming into traffic.

Abigail is an only child. Kinda. She has a seventeen year old step-sister she sees twice a month. In that time she has apparently learned enough teenage attitude to adopt it as her own. She is eight. It's annoying.

This Saturday she decided she didn't like Jacob anymore. He isn't cool enough for her. She snuck around all day whispering nasty names, pushing him, stealing his things. Of course he is ten and acts like he's five so it was quite loud here with all the upset which was his day. Also...he's off his medication COMPLETELY until we finish up retesting sometime this week. Anyway, it was ugly. And then she brought Adam into it. Adam does not need a reason to pick on Jacob. He's his brother, that's what they do, but she helped amp it up a notch. The two of them...together...relentless....doing all the things I demand to be stopped at school. There were punishments and separations until I felt like a Super Nanny parent just dragging my kid back to the step over and over. For Adam. Abigail was told repeatedly by her mother to "stop it". And that was that. I attempted to throw some consequences her way but the Miley Cyrus wanna-be would throw me some 'tude and then revert back to her own age and cry to her mom about how mean Jacob was and then my sister would stomp up and yell at Jacob. Did I already say how ugly it was? That's the only word I have for Saturday. I should buy a thesaurus.

A few weeks ago my sister scheduled a business trip this entire week. There's no one else to watch Abigail so guess where she gets to go? Yes, the grandparents. Adam has been waiting for his week since he missed his last summer. He was allright sharing it with Abigail so I was too....until Saturday.

After spending the same kind of day on Sunday except with now NEW! attempted drowning, and with plenty of warning I put the kibosh on the whole shared grandparent week.

Abigail screamed at me and declared it unfair, threw a pool ball at my mother and told her she'd be bored at her house now. My sister couldn't understand why I'd suddenly change my mind. My mother still stopped by this morning on her way out of town to see if I was "serious" since now I have to take both littles to all the appointments I scheduled for Jacob this week when I thought I'd be one less. She just kept shaking her head and I know she was worried about how she's going to keep her granddaughter from destroying her new home without someone to occupy her time. Because, yeah, she destroys things too. I guess I should be grateful for all the things I've had to trash makes us look less like hoarders, but damn, my kids liked those toys.

Adam was a wee bit sad this morning and I considered relenting all the way out to my mother's car until she saw Jacob standing behind it and told him to move away she didn't want to run over him and Abigail said...

I will probably hear from my sister tonight when she finds out I reamed her child out in my driveway.

But I no longer feel like I may have made the wrong choice by keeping Adam at home.

I'm sad for him, yes, because he won't get another chance this summer to have his week, but I just don't want him soaking all that attitude in for so long. I also love my parents too much to make them have to deal with the double trouble I am sure they'd have to endure.

He doesn't seem to upset about it. In fact, he might even seem a bit relieved.

And now, he's upstairs playing Wii with his brother. No one is fighting....so far.

It's strange to be the one pulling her child away for a change. We're usually the ones others break friendships with because they can't deal with Jacob. It's weird.
at 9:41 AM 1 comment: 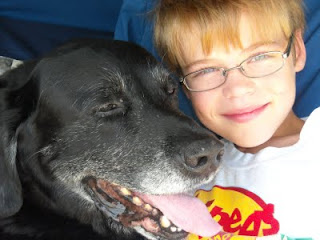 What Are YOU Looking At?

Is what crosses my mind every time I see this picture. 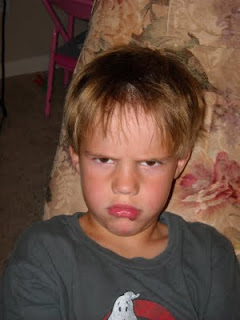 I don't remember if I mentioned it in the past, but my kids have warts. My late neice Laura got them at some point during her illness and passed them along to Jacob right before she passed away. Or maybe he caught them from all the junk he picks up, but the Laura story makes them more bearable on everyone so we'll stick with that one. Anyway, Jacob was mercilessly bullied teased about his all over his fingers and arms back in second grade so we had them removed and that was no big deal. Adam started getting the warts last summer and until a few weeks ago there were only a few on his knees. On the last day of school I noticed he had a small one right on his bottom lip. Ugh. If Jacob was bullied teased over finger warts what in the world would happen to my sweet baby over face ones? So I took him to the dermatologist last week to have them (there turned out to be three of them on his face) removed. He was all for it too. When he found out Jacob got a prize from the toy store after his procedure, he was all bring it on .

Until that first blast of whatever that freezing off stuff they shot him with was.

Traumatized I tell you.

He would not take the sticker the nurse offered him. Sticker? You're giving me a STICKER! FOR THAT? The absurdity of it all.

He refused to stop at the toy store. Someone! ANYONE! Might see me. And I'm mad. So. Very. Mad. At. My. Mother.

He wanted to go straight home to cover his face with bandages although the bandages were strictly forbidden. What if SOMEONE SEES HIM? OMG. Why did you do this to me? I want a new Mommy. I NEED a Cars 2 bandaid. Stat.

He didn't even want one of his favorite red velvet cake balls I ran out and spent too much on to relieve my guilt over screwing up yet another of my children.

He hated me. He told me so. Over and over.

Two hours later he climbed into my lap in the recliner and sobbed. His Finn McMissile bandaid quivering as he cried. He still hated me, but he still needed me. I felt so badly for him, but at the same time, I completely savored that moment.

His face has completely healed now. I think his soul has healed too. I know my heart is full just being able to soothe my children and do what I can to heal them of their hurts. I know one day soon he won't want me like that.