Life is But a Dream

Before I had children, all I wanted was children.    I didn't nearly appreciate enough the alone time, the ability to travel anywhere without snacks and a change of clothes, using the bathroom completely by myself.  I could only see what I did not have.    We moved to Texas during that hard time, in January when it was hard to pick up a teaching job.  I had lots of free time then to imagine my future kid-filled life.   I would wake up early and make big breakfasts.  I would dress quite lovely and smile at my good fortune while vacuuming the carpet BEFORE sending the kids off for the bus with their very healthy, all natural lunch.   I would stroll around the mall and shop in Ann Taylor and WEAR Ann Taylor while meeting with all the best friends I made at my Mom's group for lunch and laugh and laugh at our beautiful children exhibiting their best toddler behavior. 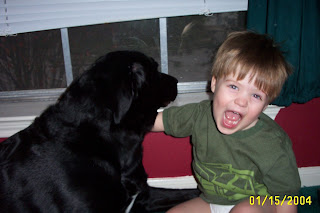 Ezra:   Please save me from these people.  They never leave.  The kid doesn't wear pants.  There is much crying.  I didn't sign on for this.

My perfect life disappeared the exact moment my water broke at 11:59 pm on March 3, 2001.  Funny thing about kids, they don't follow the plan.

I never once applied make-up before breakfast.   Many days I didn't even dress.   Shower?   HAHAHAHA.   Ann Taylor?   Hard to remove the spit-up stains and so very uncomfortable when rocking a screaming baby for hours on end.

The first one "disbanded" and then I saw them all at a McDonald's playground about a year later.  The second one, the "Christian" one, also "disbanded" but weren't as smart about it.  I still saw all the cars parked out front of the house down the street every Tuesday.  The third one didn't disband,  but no one would ever speak to me, and more than once I heard, "Don't play with Jacob".   The fourth one I was told that my boy could not play with the Dora the Explorer house because, well, he was a boy and it was a girl toy, and the leader handed me my six month old Adam who I had to sit on the floor as I extricated my screaming Dora phase Jacob through the don't-let-the-door-hit-ya-on-the-way-out entrance.  The fifth one was better, it was held in a church and you had to pay so I don't think they could kick me out.  I made a few friends I still chat with on Facebook, but there are even more I do not click when they show up on my suggestions, those who would remind their children not to go near Jacob.

Those first few years, all I wanted was that Mom's Group.  I was a stay home mom in a terrible neighborhood two thousand miles from family and I needed that support.   I looked everywhere and I just never did find it.

Yesterday I went with a neighbor to her Mom's Group outing at a splash pad on the other side of the next town (Jana, I was in your neck of the woods!)  I really did not want to go, but Elizabeth has become best friends with her daughter the past few weeks and they are moving at the end of the month so I kinda felt like I should.  I got there about a half hour before her and instead of sitting in the hot car waiting I got my kids out of the car and hiked up to the park.  I mean, it was a public park.  Did you see Animal House when the very white kids go into the black bar?  SCREECH.  Yeah, had there been a soundtrack to that moment that would've happened.  There were two benches.  TWO.  At that moment women started draping their towels over them or dumping their backpacks on the seats.  REALLY?  So I stood for a while until my back started hurting and then I moved over and sat in the grass, away from the splash pad because, well, the women started spreading out their lunches and shit all over the concrete.  Um, excuse me, they'd say and sorta push me away.  I'd say hello and get the smirky nod.  I guess I didn't get the memo that the splash pad was their own personal playground and I so very obviously was intruding.   About the time I was ready to leave my neighbor showed up with stroller in tow trying to find a place on the shaded concrete.  I watched from my faraway perch and noticed no one was moving to let her in.  No one was really talking to her.  She got a lot of smirky nods.   I wanted to yell at her that she was doing it all wrong, she didn't need those mean girls, and then it hit me.  I didn't need them either.  Never did.  I could see a lot from my far away vantage.  I saw a lot of really snotty women in their Ann Taylor clothes.  I saw a lot of toddlers in their matching swim shirts and suits.  I saw my own children laughing and playing and including all the others and BEHAVING.   All that time all I wanted was Jacob to play "normally" so I wouldn't hear it.  So the door wouldn't be held open for us.  So the groups would stop disbanding.    Yesterday as I watched all three of my kids play amongst others who paid them no mind at all I realized that my Mom's group dream was as silly as my June Cleaver aspirations.   Why had I spent so much time seeking it?  Gah.  Hate the Mom's Group.  It didn't matter if my child had autistic tendencies or was a future debutante out there.  I didn't fit in.   In my Target duds and six year old Crocs, I never would.

I still wonder sometimes if I should've waited before returning to work.  Now I know it was the best thing for me.   I fit in at work.  I meet tons of Moms and most of them are very friendly and nice and some of us have become friends over time.  In a strange way, I am the leader of this very different play group.  When they are upset because they came in late, I remind them it is just preschool.  When they let me know they had a bad morning, they yelled at their child, I tell them we had the same morning and they are relieved.  When their child goes to time-out and they are mortified, I show them my child's report card, the one with the Us in conduct because he just won't stop talking.  They feel better.  Without even knowing it, I have created the group I craved all along.  I have a degree in early childhood education and a masters degree in special education with, wait for it, emphasis on behavior disorders.  The preschool mamas respect me because of that.  They like me because I keep it real. My family and I, we are nothing if not real.   No amount of Ann Taylor was going to cure me of that.

Twelve years in and I still have a lot to learn.  I still find myself holding on to those dreams, wanting that Donna Reed life.  I have learned that some of the frustrations I have with my children come from missing the expectation instead of embracing the reality.   When I look at it from here,  my reality isn't really all that bad, sure there are issues, everyone is going to have something, but I have three kids at one time I never thought I'd have, I live in a beautiful home in a fantastic neighborhood and I have a job I love that allows me to be with my children every minute they are not in school.  I've made friends who help me remove the stains they see on my clothes, who love my children regardless of everything because they are a part of me.

And I did not need a Mom's Group to find that.

Have you seen this?

There is no way I'll ever run a marathon, but this, I will attempt.

I'll update you and let you know how it goes.