How is it possible that my baby is three? 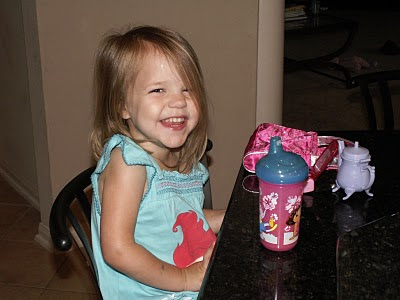 Not one night has passed that I haven't looked at her sleeping face and thanked God that she is mine.

She completes our family while also teaching us that pink is a statement, you can never have enough baby dolls, and a sticky kiss will cure everything.

My Middle Child is a Genius

Last weekend, April 3 to be precise (you know, because ONE DAY I will want to find write it in his baby book), my littlest boy asked us to remove the training wheels from his ultra-cool Hot Wheels bike.

I was so not expecting that.

Seriously, though, we spent nearly four years attempting to teach Jacob to ride his bike. First the bike was too tall, and then the ground was too hard, and then, OMG, what if a car comes??? In the end, all it took was one girl who told him she would only ride bikes with him if he took the wheels off. Bingo.

We have not even considered removing the trainers for Adam because he is LITTLE. A wee baby. He needs those things. What kind of parent would I be if I let my toddler just hop on a big kid bike?

Shut up. He's a toddler. Do not tell me he's going to kindergarten in four months because then I might have to hurt you. Toddler. Big toddler.

I tried to use the whole, we're so busy preparing for Easter/gearing up for that WVU game/drinking beer in the driveway, but he was persistent so his dad got his wrench and gave him a short lecture about how learning to ride a bicycle may take some time and you may not get it the first time, and yada-yada-yada, what? Wait up!......... 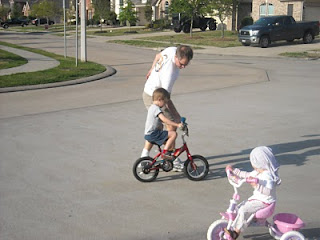 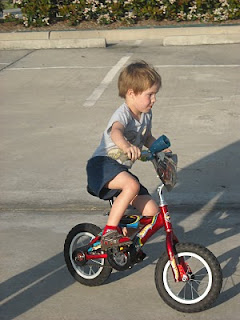 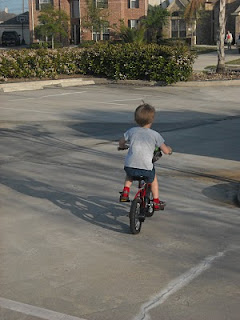 Five minutes was all it took for him to learn to ride a two-wheeler.

So quick, in fact, we didn't even have time to get him a helmet.

Which, yes, I realize he needs a helmet. No hateful comments please, you know, if anyone still reads this thing.

Although, if you'll notice, Elizabeth improvised her own helmet.
at 7:01 AM 11 comments: 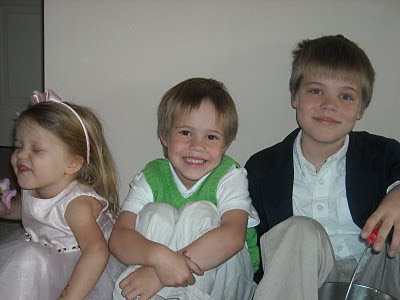