The End of the Book

I bought the book Marley and Me years ago and I've never finished it.  Oh, it's a good book.  I got many laughs from it, especially realizing how very much they had stolen from our own life.  In fact, as I look back now, I wonder where they kept the spy cameras to get all of the material.

I never finished it though.  Marley got old and Marley got sick and then I closed the book never to open it up again.  The same is to be said of the movie every time it comes on TBS.  Owen Wilson starts to look a little grieved and I switch the channel.  Lalalalalalala.  I know not what you are speaking. 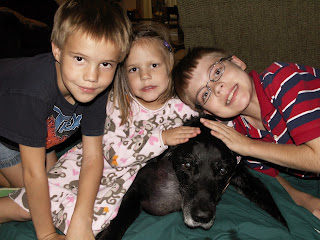 That sweet Ezra held on as long as he could.  He tried so hard for me.  I could see in his eyes he just wanted to make it all right, make my sadness stop, do whatever he could to make things stay the same, but such is the passage of time and the way of life.  None of us, animals included, are made to last forever.  His will was so strong, yet his body was so weak.

We spent Labor Day weekend at the lake with my parents.   My dad and husband went hunting as they do every Labor Day while the rest of us did as much non-labor as we could.  The weather was wonderful so we let Ezra outside most of the day that Saturday.  He roamed the land and sniffed at stuff and I was amazed at how well he was getting around.  In the back of mind I knew I should have brought him back in, but he was having such a good time, I just wanted to watch him.  I remember saying to my mom, "See, he's not too bad for a 14 1/2 year old dog".

The next morning that tumor on his leg had doubled in size.  It was red.  Blood red.  That's when my heart started to ache.

When the menfolk returned the next day they confirmed what I already suspected, that tumor was bleeding inside.   Of course, that's a bad thing.

I honestly thought he'd die that day.  I don't know nothing about no bleeding tumors, but we brought him home and waited.  He ate bacon wrapped New York strip steak one night.  Rare bacon cheeseburgers the next night.   Spaghetti meatballs and an entire bunch of bananas the next.

He didn't seem to be in any pain and  he was still able to get up and down and go outside and most especially eat anything given to him plus beg for whatever I had, which was gladly given.

On Sunday my husband and my dad left for their yearly trip out west.  No one needs to tell me how selfish he was to leave at that time.  The money was spent,  the trip long planned and I sent him on his way.  To be honest, I enjoy this particular trip because my mom always comes to stay and she will pick the kids up from school relieving me of the pick-up line for four days and, well, if you have kids and have done the pick-up line you know how much I was looking forward to it.

Also on Sunday.  Ezra couldn't stand up as long as he had been.  If you weren't looking for it, you probably wouldn't have noticed it, but that ache was in my heart.  I was looking for it.   I smiled and waved and prayed he'd live until they got back.

Also on Sunday.  I got the shingles.  Coincidence?  I think not.

Ezra did pretty well Monday and Tuesday.  He was still eating and walking and getting up and down, just more slowly and the desire to trot all the way across the kitchen to beg for my food just wasn't worth it anymore.  I brought the food to him.

On Wednesday the tumor began bleeding.  Just a tiny little speck, you'd almost miss it if you weren't looking for it, but you know I was looking for it.  That ache became a pound.   I sobbed in my bathroom for two hours and then I pulled myself together and spent the night on the floor with my first furry baby.   Every time I'd cry he'd shiver.  I thought he was in pain and maybe he was, but if I stopped crying, he'd stop shivering.  It broke my heart because I knew, even in his death, that dog was wanting so much to take my own pain away.  I had to be strong for him and I tried, but it was hard.

By Thursday morning there were four more spots and they were bleeding more.  When I took him outside I could not believe the pool of blood under him.   He hung his head in shame.  I told him over and over how I was not mad at him but he'd lost his dignity at that point.   He didn't like being a burden on us.

I had to work that day, although really, I probably didn't.  My boss would've let me stay home, but I couldn't.  I needed my pounding heart to calm down.   My mom, God love her, stayed home and petted that dog all morning until the menfolk arrived again.  My cell started ringing as soon as my morning was finished and I knew.  I didn't answer for half an hour but when I did my husband was sobbing.  "You know what I need to do?"  Of course I did.  I had known it since the ache crept in.

I went home and spent ten minutes crying over my first baby.  I told him how very much I loved him and what a great brother he'd been to the children.  I told him I knew he'd be there to greet me when it was my time, in fact, I am sure he'll push everyone else out of the way to get to me first.  I told him I knew he loved me and he had taken such good care of me all these years but I was able to do it myself now.  He's gotten me through those very hard infant nights and friendless days and now it was his turn to go to Laura and Sadie and Mimi and Haley and RUN.....Run like the damn wind that we'd all be okay......eventually.

I took plaster paw prints and brushed some hair into a bag and then my sister drove me back to work while they took him in my car.

We told the children we had to take him to the vet because of the bleeding tumor and he died while he was there.   I suspect Jacob knows the truth, but he hasn't said anything.   We must have been pretty convincing because this morning my sister says to me, "I can't believe he died as soon as you got him to the vet."   I was always the smart one.

Our home is so empty.  I never realized how much that dog was a part of the minutes of my day.   Every time I passed him I bent down to give him a pat, I still find myself gearing up to do so when I pass his favorite spot.   I tossed him our pizza crust the other night.  It got sauce on the carpet because no one was there to get it.  We went out to eat this morning and it was sad not to be greeted at the door with his nose in the air wondering what we'd brought him in the bag.   Plus, my goodness, how much food my youngest two children waste.  I have always just absentmindedly scraped what's left in his bowl not really paying attention, but, WOW, that dog has eaten really well since they came along.

So I read the book The Art of Racing in the Rain  at the recommendation of a friend who thought I needed to read it after this week.  It was okay.  I think I may need to read it again because I suspect I am still in somewhat of a fog, but my first impression, eh.

But I do think I will go back and finish Marley and Me.  I have lived the whole book now.  I know what's coming.   I can do it now, because I know it cannot be as bad as the real thing. 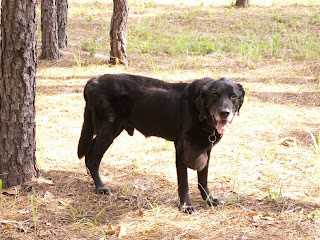