What did I say the last time we talked about Jacob's school?

We were sending him to the public middle school right?

No, we won't be doing that. At least not next year. Well, unless we change our minds again, which is entirely possible.

A few weeks ago I spent part of the morning with Jacob in his fifth grade class helping him to prepare a presentation on Greece, something I'd he'd been working on for weeks. I He made baklava and taboulleh, and a huge Lego piece depicting the Trojan War. So I was there a bit and I watched the kids around me and was suddenly struck by how old they all were. Two of the boys needed to shave. I shit you not. But that wasn't the worst thing. The worst thing was their attitude. Deary me, it was brutal. At one point I even stood up and gave a small speech about how they were attending Christian school and, well, where are the Christian attitudes? Then the teacher pulled me outside and gave me a little speech explaining this is just how fifth graders are, exerting their independence, pushing the envelope, seeing where they fit, yada, yada, yada. And then I went back to my tiny three-year-olds and continued to teach them how to love each other and use good manners, wondering wth am I working this hard? They'll just get older and be expected to act like assholes and all my hard work will fly down the drain. Gah.

It was hard to be in that fifth grade room. It was so blatantly obvious my kid does not fit there. At least the teacher shushed them up when they started laughing at his Legos. My kid plays with Legos. The other kids text during class. Huge maturity gap.

When I approached the husband with my plan he said he'd go along with it IF he went ahead and did sixth grade at the private school (shudder, he'll still be there with the shavers) where he can learn the locker/changing classes situation in a smaller setting and also have a study hall with a teacher who teaches organizational skills, hopefully helping him prepare himself for doing it own him own the next year. Also, they do guitar in sixth grade and I think the husband really wanted that for him as well.

I am still pushing to redo fifth grade at the public elementary school. I feel like he could meet some kids and move forward the next year with them. Also, if he needs special ed services, we can start the process in his redo year and be ready when he moves on. I have a feeling a will lose this battle though.

So.....as of today (and it could still change), Jacob will go to sixth grade at the private school just like always and do it again the next year but at the middle school down the street.

Everything Happens for a Reason

WTH IS THAT REASON?

But that's not where I'm going with this....

Let's rewind 12 years shall we?

June 2000: The husband and I had been living in Hell Hole Neighborhood, Texas for about six months. I still didn't have a job. I liked all that free time and most especially the sleeping until 11 every morning, but I was bored. And becoming broke.

Off topic....OMG, 11? Our days are now already hours old by then. I should've appreciated that more.

Anyway, I drug myself out of my cozy bed and hit the pavement in search of a job and whaddya know? All I had to do was ask for one. I got the first one after my first interview. I started teaching second grade two months later and a month after that peed on the stick and found two pink lines.

I went from lounging every day to having a difficult, sometimes bed-ridden pregnancy plus 22 students who depended on me to learn to read and, you know, pass second grade. It was hard. All I wanted at that time was to go back home and pretend I'd never been to that interview. The vice-principal was always on my case because, although I had doctor excuses, she thought I was lying every time I'd be sentenced to bed rest. The kids weren't very well-behaved, most likely because they never knew who was actually going to be their teacher any given day and I was just so freaking tired. I did, however, meet some very nice women and the best part of my day was lunch in the teacher's lounge with them. When Jacob was born so early and my career abruptly ended, I was glad to be off my feet, but I missed those women. Oh, we kept in touch for a while, but you know how things go especially with children, you just don't find the time....

I am sitting at a table at the first staff meeting at my first job in ten years. I am scanning through the handouts and come to the page listing all employees and I recognized a name but then I thought, now there's lots of that surname in these parts surely not.

But surely so. One of those women was now my co-worker again. Her three year old daughter was in my class.

You know they say things happen for a reason.

I hated that job. I don't know why I took that particular job over another offered to me at the same time. Shoot, I have no idea why I even applied there as it was in the next district over and a 30 minute drive each way. I wondered constantly why the heck was I there?

I find it so odd that my friend and I just happen to end up living and working in the same town when each of us lived somewhere else ten years ago. It's like she was meant to be in my life, I was meant to meet her and to know her.

Our daughters are the same age. They are best friends. Inseparable. BFFs.

Eleven years ago we gave birth to boys within two weeks of each other and then went our separate ways. 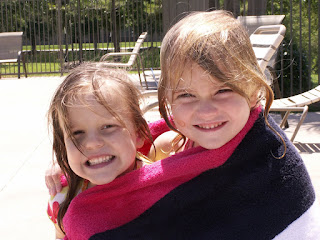 Today we lay by the pool and watch our girls share secrets and giggle and pretend to be mermaids.

So as much as I hate to hear it, things do happen for a reason.