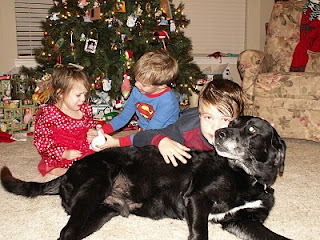 I'll never get a decent picture of my kids on Christmas Eve will I?

Oh well. These rotten ones are starting to grow on me.

I didn't get many pictures of the present gluttony. No one else would help me take any and I was spending to much time saying, "Show me what you got" and "Look the hell at me!" so I gave up. Plus I had to sit down a lot. That was day six of the virus. But because we are such givers, we went ahead and went to church AND to the Christmas party down the street. Everyone was fever-free at that moment. How was I to know they'd all start sporting them again the next day? 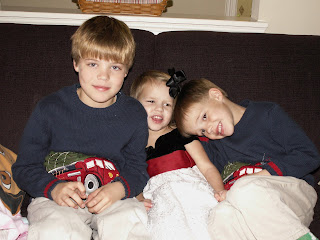 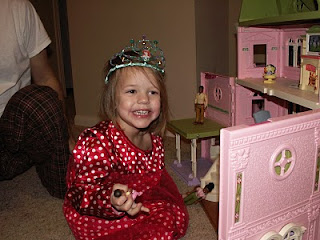 Santa brought a nice dollhouse for Elizabeth. She loves it. She doesn't even mind that Santa just picked up any box willy-nilly not realizing there was a choice of families even though the picture was plain as broad daylight on the box. While we were skeptical of the outcome upon first sight, she never even noticed the difference. Elizabeth's loving family gets along just fine with her new Strawberry Shortcake and Toy Story 3 Barbie and the mama has a delightful weave extension that they all just adore. I hear them complimenting her on it all the time. Really. 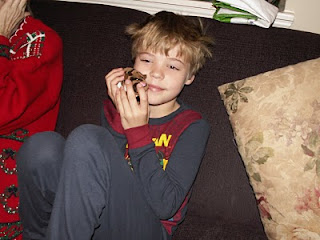 Santa brought Jacob a nice, new DSi and the Kingdom Castle Lego Sets ($$$) he desired but they played second fiddle most of the day to the creepy toy hamster he picked up on sale on a whim (yay! a bargain! must get it!). Five dollars. O-Kay. 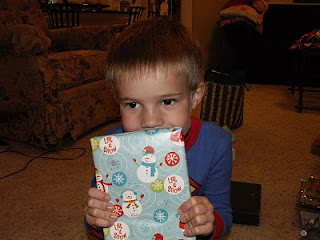 After we empty the stockings and inspect all that Santa supplied, we eat a short breakfast and then get back to business. The kids are usually fine with this although a bit antsy but this year Adam drove us absolutely batty wanting to open this one gift. I don't know what he was expecting, he never would say, but when we finally let him go first and rip that thing open he was in a rage. Adam. Was in a rage. Easy-going, laid-back, aw-what-the-heck-I'm-good Adam flew completely off the handle when he saw Sword in the Stone (which he loves btw). I should include the poor kid had a fever of about 101 and coughed the whole night through, but still. Completely out of character for him. Needless to say he missed five minutes of the festivities. 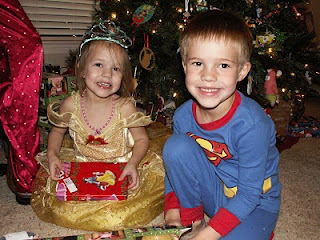 Aside from the funky dollhouse, Elizabeth had a very Belle Christmas. Three Belle dolls, a Belle barbie, and a costume, plus jewelry, cosmetics, and paper crafts all sporting the current favorite Princess. Santa had a hard time finding the right Belle baby because he kept sending his elves out for it who returned with not quite the correct replica and the coveted one could only be found on Amazon for quintuple the original price so he had to make some choices. Imagine his suprise when he found it at the grocery store of all places and the little Belle fan was right there! Screaming to take it home no less. It took some manuevering, but the big elf left his post at his very important job, sped all the way to the house to stay with her for fifteen minutes so Santa could go back and retrieve the ONLY BELLE to be found before someone else realized what a dusty gold mine they had there. It was worth it too. She rocked and cooed to that Baby Belle all day long and declared her "perfect". She has since included all the other Belles and is currently having a tea party with all three upstairs.

I must go get their picture.

The husband surprised me with a Kindle although we'd decided not to exchange gifts this year. I love me some Kindle. When it works. I'm going to let him go on his annual one week ski trip and not complain about it. I'm figuring that was his angle all along, but what the heck.

And It's Only Day Five

Our family has been blessed this Christmas. One of my precious students, whose mother just could not let her miss the holiday party even though she had a 104 degree fever, graced me with not only a huge hug but a parting uncovered sneeze resulting in all of us being diagnosed with the 11-day virus which is currently making it's way around southeast Texas.

At least that mama rewarded me with a whole $1 Target gift card before she drove away in her bright blue Hummer.

I mean, seriously, I just would've liked to have seen the look on the cashier's face when she requested ONE dollar. Really?

I don't mean to sound ungrateful, but dammit. She made me sick. On Christmas. Bah, Humbug.

I need another week.

I have done no baking. There has been no decorating. Our tree is up but it's missing an entire box of ornaments that is still sitting outside the attic door waiting to be carried downstairs. Only half of the outside lights are strung. I forgot to buy Elizabeth's music teachers gifts. We haven't looked at Christmas lights. Our Christmas dinner needs to be started.

I am completely overwhelmed with all that needs to be done before tomorrow.

I'm still trying to figure out how we'll get two sick kids out of the house long enough to bring the big stuff out before midnight. I don't even feel like digging out the big stuff.

You know what else? My mom was here last week just long enough to be coughed on and now both my parents are sick as well. Too sick to make the three hour drive to see what Santa brings.

And the ham is staying with them too.

I want a Christmas do-over.

Wondering if the kids will notice if it doesn't happen until New Years this year.
at 10:25 AM 3 comments:

It's the first day of winter!

It's 85 degrees outside and I'm enjoying the weather my sweet little terrors babies.

They are currently painting an early Christmas gift of wiggly wooden snakes stripped down to their underwear while listening to Let it Snow. Don't want to get paint on their clothes, you know.

If the neighborhood pool weren't locked, we'd head over there for the afternoon. And you know what, if I can figure out how to climb the fence it might still be an option.

I could bring my radio and turn it to the all-Christmas song station.

That would be a hoot.

Of course, we can always go sledding..... 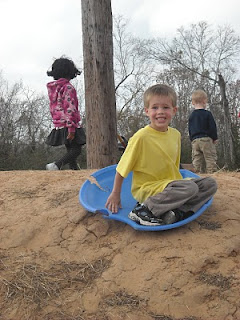 Excuse me while I set up the sprinklers between our holiday decorations. 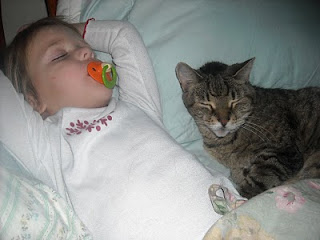 My cat and my doll.

This is a nightly occurence.

Phoebe was never interested in the boys. In fact, she spent much time hidden in closets or under beds while they were tiny. She still doesn't seem to notice them much, although she doesn't hide as much as she used to.

The day we brought Elizabeth home from the hospital we placed her in her crib and went back to check on her ten minutes later and right there beside her was that old cat. She was purring. Of course we didn't leave her there, but every chance she got she tried to sneak in.

It was like she was so grateful to finally have some more estrogen in the house.

Do cats have estrogen?

Elizabeth drags her, brushes her, puts stickers on her, rocks her, and attempts to dress her like a princess and that cat just takes it.

Twelve years that cat loved only me. She was part of our family, but she was my cat.

And you know what, I'm okay with that.