We were able to get in yesterday with the child psychiatrist due to a cancellation. Thank you canceller.

I liked her much better than the last guy. We met with her an entire fifty minutes as opposed to the maximum six with the other guy. She also actually spoke to Jacob and asked him how he felt which, wow, yeah, maybe the kid going through it all can give some feedback for once. I was, however, a bit confused when she refused to prescribe some anti-anxiety medications. She agreed he has anxiety and ODD (oppositional defiance disorder) but we're going to lower his patch dosage and supplement that with a three hour pill in the morning while the patch is taking effect.

We haven't been anywhere today so I can't say anything about the anxiety, but the ADHD? It's there. In full force. In fact he's screaming just for the pure hell of it as I type. That's what $180 buys me I guess. Thirty more days of this.

The husband and I moved to Texas over eleven years ago. Just he and I and our very young pets made the 24 hour journey completely away from everyone and everything we knew.

We landed in a shitty neighborhood thanks to our stellar realtor who assured us we were buying in a very desirable area just to make her last sale before she caught a flight to begin her new life in Puerto Rico two weeks later. Of course, I guess you could consider it desirable, you know if you were a thug or graffiti artist. Anyway, living there for so long we didn't make many connections and if you go back to the very beginnings of this blog you'll see how very needy I was for human companionship, some friends, maybe some family.

Thank goodness we found this home when we did. It really has been a tremendous blessing. Can you believe we've lived here three years this weekend? I swear, I can still smell the new house smell when we walk in the front door. I love it here, I really do. I am surrounded by wonderful neighbors who I can honestly say are my friends. I am lonely no more.

But when I lived over there, I always wished I had some family nearby. Someone to call when I needed an egg or a babysitter or just someone to grill out with on a nice spring evening, but I knew that would never happen. My sister had a great job and loved where she lived and my parents did move closer, just not close enough.

My sister's company was bought out by a different company that happens to have a location right smack here in the very town I live in right now at this moment. She was told in April in no uncertain terms that, well, if she wanted to keep working for them she would accept the very generous promotion they were offering her.

And so she did.

She's been here working for a month now already. Tonight she'll be back with her daughter and some belongings and get settled in an apartment not nine hours away but down the street. Her husband will be coming once he finds work and/or sells their house and although she is bummed by this, I, in fact, am not, but that's all I'll say about that.

How long do you think I have to let her get settled before I start dropping my kids off there?
at 12:46 PM 3 comments:

It ain't for the weak.

You have to prepared for everything and sometimes, well, you just aren't.

I just returned from a pool party. An hour early. Elizabeth pitched a fit of epic proportion over, well, I'm still not quite sure, but I told her once to either go back to the pool or walk with me to the showers where she could get dressed and when she refused both I added the old, we-can-go-home-if-you-don't option thinking I was all smart and she'd make a choice and I could then go back to sitting on my ass gossipingchatting with the other parents.

And you know what? I really, really didn't want to pick her up and take her home because her brother was behaving like an angel in that pool and, whoops, didn't think about him when I threw out that threat. I

And there I was, squatting on a wet floor in front of ten other parents who were trying desperately not to appear as though they were watching the whole thing.

Man, I really wanted to let it go. But I didn't. And to be honest, if all those eyes weren't watching me out of their peripheral vision, I might have, but I knew if I did, the next party would be even uglier.

So as calmly as I could I had Adam exit the pool. I squeezed all three of us through the crowd into the extremely tiny party room where the rest of the parents and our things were waiting. I attempted to explain to the hostess what the hell was going on amidst the chaos, but I think all I got was a half-hearted wave as I literally dragged one screaming child through the parking lot with another repeating "I want to stay, what did I do?" over and over while the whole party had their faces pressed against the glass watching it all.

At that moment I could have melted right into the pavement.

What do you think the odds are that they'll all move away before school starts?

I am so embarrassed. My heart is still thumping hard two hours later.

I am not strong enough for this. My weak is showing. I am waving my white flag.
at 4:09 PM 3 comments:

is such a sweet little boy.

Oh, he isn't perfect. He can be stubborn. He sometimes sneaks out of the house to play with his friends without telling me. He knows where Jacob's buttons are and pushes them regularly. For the most part, though, he is a sweetie.

This morning as I was dropping off Elizabeth at her stop at bible school Adam says, "She is such a sweet little girl, I love her so much and miss her when she's not with me".

And I know he meant it with his full heart. 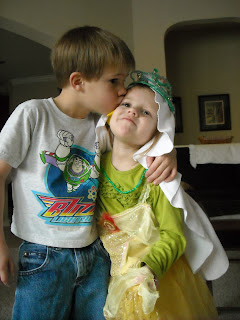 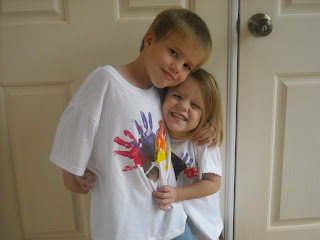 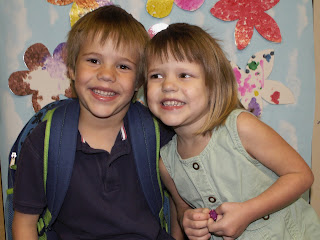 Adam has adored Elizabeth since the evening she was born. The morning of her birth he wasn't so sure, but there was true love at second sight and since then I have known G*d sent Elizabeth not to me, but to Adam. He will even tell you himself that she was G*d's most perfect gift to him.

I mean, what six year old says that about his sister?

It's easy to focus on what is not going right in my life. I pray hourly daily for strength and guidance and, well, just a little bit of peace where Jacob is concerned. I tend to forget how so very blessed I am. It may not have been completely as I imagined, but it's a blessing.

"For we live by faith, not by sight" II Corinthians 5:7

There is a reason to my current season. I may never understand it, but I have faith it will get better.

And I am forever grateful for my sweet little reminder.
at 2:05 PM 1 comment:

My baby graduated from kindergarten. 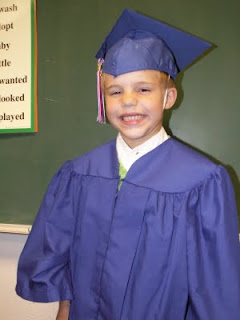 Although it was Adam's evening, the focus quickly shifted.

We let Adam pick the dinner choice that night and, of course, he chose Panda. It would've been really nice too if Jacob hadn't decided the only other people in the place were after him and spent the entire dinner growling and rocking back and forth and demanding we bag our food to take home. Which, eventually, we had to do. By the time we got to the ceremony I was sobbing and not completely all because my darling was suddenly a huge first grader. How in the world did this sweet baby become a kindergarten graduate? Ah, I love him so.

A week later Jacob had no problem whatsoever attending his own non awards night and even requested a special dinner himself. At Panda. WTH? You really should have seen the look on my face.

But no. We went for the awards and that was it. I still wonder if we should've even skipped that. Sent him some sort of message but it's over and done with. We went. He was thrilled and happy over his one award and showed no evidence of fearing everyone around him which, of course, he did the next day when I had to buy groceries insisting the terrorists were coming for him very loudly near the Muslims who followed us around with their carts.

The child has been diagnosed with ADD, not ADHD, although I am thinking he's gained an H since we was last tested, Auditory Processing Disorder, which, WTF? I don't even know what that is and I have a Masters Degree in Special Education, and mild anxiety which I believe has escalated over the years to moderate anxiety or possible selective anxiety.

He takes a 20 mg patch of Daytrana daily that takes almost two hours to begin working. Those are some pretty fun two hours I tell ya. Yes, I am being sarcastic.

I tried halving his dosage to see if we'd be able to actually go anywhere but while he wasn't afraid of the neighbors anymore we still couldn't go anywhere because it's a bit embarrassing when your ten year old is doing somersaults in the Target.

So he went back on his original dose.

And he fought me the next four mornings on, well, everything.

On the fifth morning he arose early, put on the patch without a fight, completed ALL of his chores and school work before I even awoke, and FLUSHED THE TOILET which apparently frightens the shit out of him because he won't ever do it.

The night before he asked to play with some girl he adores that day and I told him only if he did his chores and straightened up his attitude.

And it didn't even scare him to ride his bike to the complete opposite end of the neighborhood to go find her. Amazingly, just that day there were no people out to get him.

Sadly, said girl left that day to go spend six weeks at her dad's so guess who's afraid of everything again?

Selective anxiety is my official diagnosis.

But just to be sure, we are keeping the July 18 psychiatrist appointment, we have a Monday appointment with some sorta social skills coach? I am not sure what she actually does but the sweet therapist lady seems to think it will help.

And again, something that starts out about Adam turns out about Jacob. It's no wonder poor Adam picks on Jacob every chance he gets. But that is a whole other story.
at 8:30 AM 1 comment: