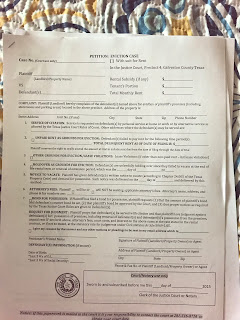 The 34 pictures from every angle and every step to the stage as your child receives the Best Student Ever?   I don't want to see that.   The thousands of cords breaking your kid's back in his graduation gown?   I don't want to see that.   The fistsfull of awards?   Nope not that either.    I just do not give one fucking shit about that.   Yes, I know it's your Facebook page and you can post whatever you want on it and I encourage you to do so, just know I scroll right past or in certain cases I have blocked you altogether.

You would think after YEARS AND YEARS AND YEARS of my children barely scraping by I would be used to this but you know what?....it just gets worse.    Every year I think THIS will be his, his, and her year.    Please sweet Jesus remind me in August that it will NEVER be their year.    My kids have no passion for anything.  They are not smart.   They do not care about others and they have no character to speak of.   I know this because they have no awards for it.     I guess in a way it's a good thing because I can go to the bar and have drinks with my friends on awards night.   Well, I could only in theory because my friends are all at school watching their own kids get awards.

One of my children is failing the 12th grade at the finish line because he has a point to prove and another one is failing math and has to go to summer school because instead of turning in her homework papers we spend hours a night doing SHE THROWS THEM AWAY.    My other child doesn't want to do sports anymore because he has to be at the school all summer at 7 am and ain't nobody got time for that.

Where do you get those children who have drive and ambition?   I want to exchange mine.

I hope all your Facebook pictures make you feel like a fantastic parent because they should.    All they do for me is make me contemplate foster homes for mine because, obviously, this is something I did.

I refuse to throw out all that touchy feely shit about my lazy children, how I am proud of them no matter what because, you know what?   I am not.   If that makes me a bad parent then I am a bad parent.   All three of these children could do so much more than what they are doing they just refuse to do it.    Where will this lead them?   The best I can hope for is skate by and be average and I would be OKAY with that but they could excel.   Why won't they?

What they tell me is, "Why bother?"   The same kids win the same shit every year.   If you don't start out winning in first grade you never win.    I watch my preschool parents retain their perfectally capable and smart children because they want them to be  farther ahead of the others so they can win the awards (no joke).

Don't be expecting any pictures of my children this month.      While your children have been busy getting every single award every year, my kids' motivation and esteem fell until they no longer want to attempt because it hurts less when you lose and you don't try.   Trust me.  Next  year I won't even try.

Have you ever just wanted your life to end?

I don't know what I did to deserve this, I have always thought of myself as a pretty decent and good person, but apparently I pissed off the universe sometime, somewhere.

My husband had a Boy Scout event on Saturday so he was gone all day.   In case you aren't aware, we had two Boy Scouts for a while, they quit.   My husband keeps going.   Of course he does.   If he is there, he doesn't have to be here.   This happens almost every weekend.    I BEG him not to leave me with him and he just chuckles.   He is not as awful to him as he is to me and I am Jacob's target.   He attempts to pit him against me through lies and when I tell him Jacob did XXX and then Jacob gives him Yes, Sir, No Sir, he gives me the side-eye.   Years.   Years of this.

Jacob started screaming at 9:54 because "It is 6 fucking AM I shouldn't have to empty a dishwasher before daylight!"  and kept going.    Anytime I attempt to get help from my husband his response is to call the cops.   Everytime.   This time I didn't even call him.   I called the police.   The short version of this story is the cops were complete assholes and actually had him record them telling him that until he graduates we are legally obligated to him and CANNOT kick him out.

Seriously.   They seriously did that.

The cop in October told us we could evict him at 18.  I guess that is not a thing.

Also, you need to go through the local government to have him evicted and he has thirty days after the forty-five days it takes to complete the eviction process.    He has squatter's rights.

Today, he missed the bus.

A solid hour of stomping, cussing, slamming doors, throwing things, beating on the other kid's doors, spitting, splashing toilet water, peeing on the floor.   The three of us locked in our rooms.   My husband, of course, is at work.   He would never behave that way if he were here.

When I finally "get up" since I need to get these other kids dressed and out the door, he bellows at me that I need to "get my ass up and take him to school".     Oh yes!   Let me get on that!   I said no.   Act Two commenced.

So here we are.     He can walk to school.   He walks home every day.   He just won't because my lazy ass should be driving him.   He called my husband, of course, told him a bunch of lies so that guarantees our evening should be just as pleasant as our morning.     I guess he'll stay here all day long cussing and screaming and destroying whatever he can whenever he wants because I was told specifically the police could not help me.   I told them he might kill us one day and that bald ass fuck just shrugged.

I am done.   I am just fucking done.   I do not know where to go from here.    I just know I cannot continue.  This "child" is never going anywhere.   He won't graduate now because he knows he can live here forever if he doesn't.   He doesn't have to work, doesn't have to contribute, doesn't have to pay bills, he just stays here every fucking single day of his life and abuses us and is allowed to do so. If he were my husband those cops would be encouraging me to leave, it's my child so now I can't?    AND I need to work and support him?

I understand the desperation suicidal people feel.   You feel trapped with no one to turn to and no where to go and the complete and utter unhappiness just buries you.    I try.   I try to fix this.    Everyday I try to fix this.   Everyday of the past 18 miserable years but it never gets better.   At least before I always had an out.   I knew the day would come that we did not need to keep him here, something to look forward to (and I realize that looking forward to the day you kick your child out is pretty perverse), and now.....it's not there.   Our sentence has been extended.

It will never end.   I have been given life without parole.    And I don't even know what I did.