I want to poke my eyes out with a rusty fork.

I got so excited yesterday when we got the calls.   I thought they were crazy, but still…..NO WORK!  NO SCHOOL!  Yippee!!!

The little kids made a fort in the living room and slept away from me for the first time in weeks.

We were going to drink cider and watch Back to the Future (all three!) and not get dressed and love our life today.

I don't know why I ever think we will EVER have just a nice relaxing day.

As is usual for our mornings, it was ugly.

The same yelling, the same fighting, the same fits.   I don't even remember what it was all about, but eventually I sent Jacob upstairs and told him not to come down until his meds kicked in.

About an hour later I went up to retrieve him and saw his patch still in the package on his desk.  (Shame on me for trusting) and Adam's dirty clothes piled on the bathroom rug covered in pee.  Along with the tile floor and grout and the wall and sink cabinet surrounding the toilet.

Are you fricking kidding me?

Oh, he blamed it on the cat.  Which would not be too unusual, we have an 18 year old cat, but um,  it you've ever had a cat you know there is a distinctly different odor.  I've dealt with cat pee before.  Just last week even.  This, most certainly, was NOT cat pee.   As calmly as I could, I put the sopping wet clothes down the laundry chute and handed him the rug and told him to take it outside and hose it off.   He lost his ever loving mind and let me know that was MY job.

Sure anyone else would just throw that rubber backed rug into the washer but guess whose husband bought a washer that has a great big Mr. Yuk sticker on the lid explaining how you can't wash anything waterproof or else you'll ruin your washer.    I mean, WHAT?

He wouldn't clean the rug.  Or anything else for that matter.  And I was informed it was a holiday so he didn't have to do anything and I should get my lazy ass downstairs and fix him something to eat because that was my job.

That's when I dragged his ass outside.

With instructions that he could come in when it was rinsed.

He spent 30 minutes beating on our front glass door.    There's a crack now.  I am waiting for it to completely collapse soon.  Then what do we do?  Invite the neighbors in?

I kept waiting for the police to show up.  It was 35 degrees outside and raining.  I probably should have let him in.  I know he was sure I would let him in.   I know my neighbors are probably still talking about me.  But you know what?  I told him to do something.  I don't think I was being unreasonable in asking him to clean the mess HE made.   I was NOT going to let a fit throwing toddler-like teenager believe I would back down and do it myself.  This child IS going to learn that HE is responsible for his behaviors and actions.    Thirty minutes later he finally sat down and shut up and I opened the door.   He washed the rug.  Sort of.

This is what we get.  Always.  It would have been easier to just throw the damn rug away.  I could've cleaned the floor myself.  (Adam actually cleaned the floor and wall and sink).   I could've said absolutely nothing to him today and avoided all of this.  In fact, I have done just that before because sometimes I just don't have the energy to deal with it, but he is almost 13 years old.  This has GOT to stop because,  HELLO ADULTHOOD COMING.  Plus, I just don't know how much more I can take.

He had a psych appointment last week.  My husband took him for the first time ever.   He explained to her how we are reaching a breaking point and she prescribed yet another medication.   That makes three now.  So far I can't tell it's making any difference.   I bought a bunch of essential oils for a ton of money that someone else swore worked so well they were able to quit the meds.    I swear it made him worse.  At least they smelled good.   I have cut out dyes and gluten and artificial everything and still, here we are.   We will never enjoy an evening or a weekend or a family vacation or even a rare snow day because this is what we get during the hours he is here.

I want a good snow day.

He is up in his room and I hesitate before calling for him to come down to get his folded laundry to put away.  I could just do it myself tomorrow, but I don't want to so I brace myself and ask him to come down.  He waited a bit but finally came, I held out the stack of clothes and told him I wanted them put up and he answered, "Yes Ma'am" and took them up.  Of course I haven't gone up to check that they aren't on the floor, but no fight.  This is the conundrum with him……Before the meds = hell; After the meds= not always so bad.  BUT…BUT….BUT…..I know if I'd woken him this morning, told him if he got through the day without fighting, raising his voice, or complaining we could go to Game Stop, then he would have been wonderful.   I know, because I've done it before.  Ugh.

At least we were then able to have cocoa and cookies for lunch.  He declined.
at 12:50 PM 2 comments: 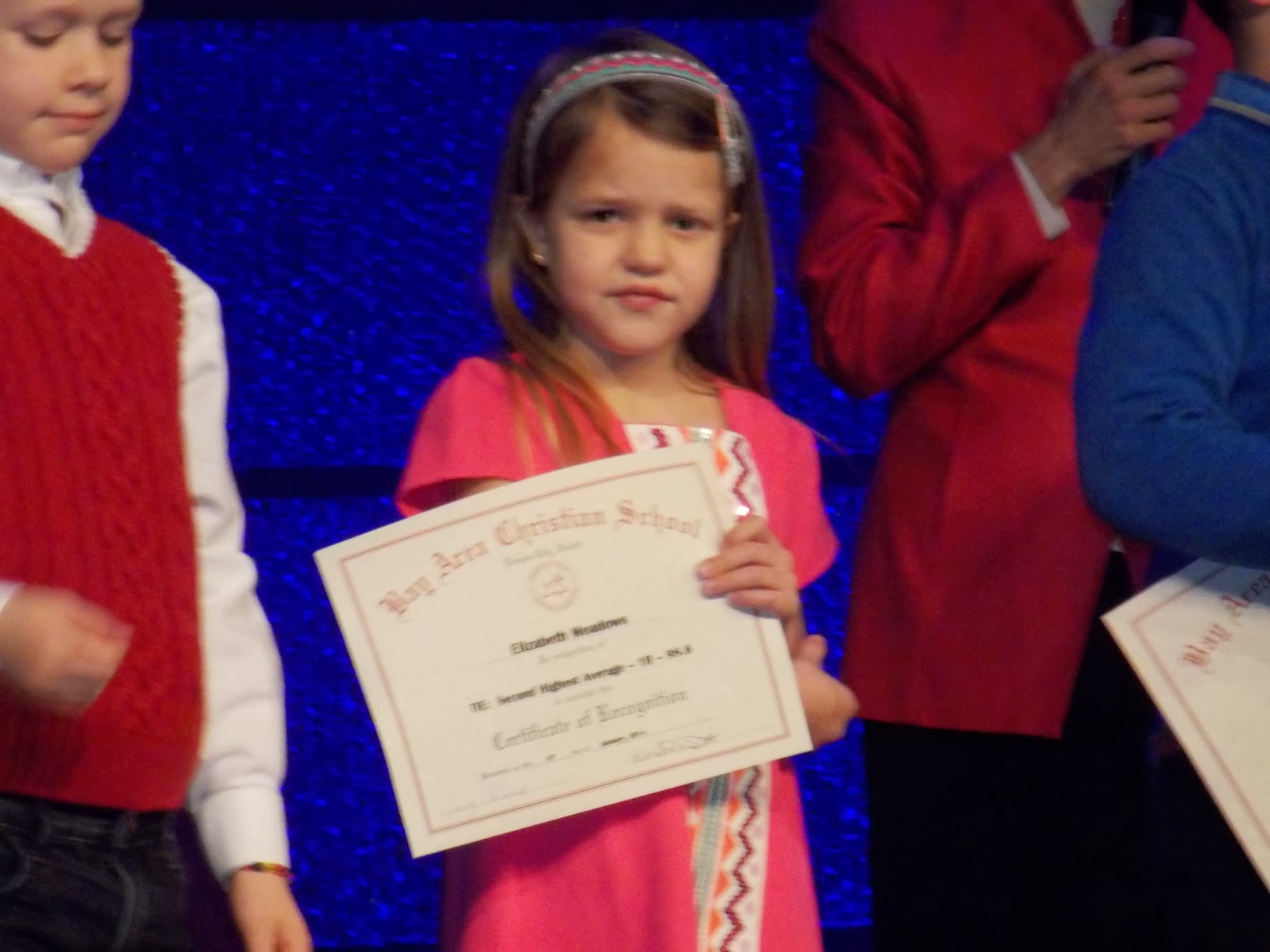 That face is because she realized the boy with the highest average got a medal.  A medal.

She came back to sit with me after it was over and this was our conversation:

Me:  You got an award, aren't you proud of yourself?

Me:  No.  You were recognized in front of the whole school for doing so well in school.

Me:  Then you have to get highest average.

Her:  Austin better watch out.

Does this make me a better mother?  Because I think it redeems me.   My kid.  Who is raised by me.   Who possesses my DNA.  Got an award.

My children bicker a lot.  Over stupid stuff.  Everywhere.  Anywhere.

This afternoon we were in the car heading to yet another psychologist appointment when all three started screaming about something.  I don't even listen anymore.  I told them once to knock it off.   It continued.   I yelled at them to shut the hell up.   Still continued.   I sat and fumed for a bit and then I found a classical music station on the radio (91.7 for you locals).    Within thirty seconds it was quiet.  We rode the rest of the way in silence.   Adam even opened the door for Elizabeth when we arrived.

So we head home and it starts again so I instantly go back to the music.   Silence.

We ate dinner.  We cleaned up.   I have the television on the classical music station and all three are playing Wii together with inside voices.

I feel like this has to be a fluke.  Right?

I mean, I have heard that music soothes the savage beast, but really?

I guess I'll be adding this to our routine.

Every year I make a big list of the things I am going to do to make our lives better as the calendar changes.    Sometimes I stick to them, sometimes I forget all about them until I look back and see, oh yeah....oops.  I swore I wasn't going to make any in 2014, but I have this innate need to make lists and check off those lists, and work toward a goal.  It really is very annoying.

I did lose about 8 pounds last year.  I don't really know how I did it, except maybe the trip to Disney where we didn't purchase the dining plan and only ate one meal a day.   Combined with all that walking, I lost 15 pounds in just that one week alone.  Of course, they opened a Which Wich very close to me resulting in gaining some of it back, but I am now a size 8 again instead of almost a 12.  I'll take it.  I am 45 years old and approaching menopause.  I doubt I'll ever wear my size 2s again.   I hope to exercise at some point.  Don't know when that will be since I HATE it, but one day.  Maybe.

I did not blog every week last year, but I did double my blog posts so it's a start.  I don't think I'll ever get back to the way it used to be (sunrise, sunset), but such is life.  Hopefully I'll be able to document the big important things here because the baby books are collecting dust.

There will be pictures on our walls and stairway at some point in 2014.   Ditto curtains.

The biggest thing I want to change this year are our mornings.   Me, oh my.   I want to smash my face into the granite every.  single.  morning.   It is awful here.  Don't ever come here before 9 am.  Ever.  Or maybe do come here.  It will make you feel good about your life.   Oy.   I really don't know what to do for the hour-two hours we are waiting for Jacob's meds to kick in.  I have tried ignoring him, I have tried starting earlier, I have tried starting later, I have tried prayer, I have tried separation, I have even tried alcohol on non-school days.  Yes.  It's that bad.  I don't know what else to try yet, but we need the mornings to change.  The morning sets the tone for the rest of our days and I think if we can get this under control we'd all be so much happier.

Anyway, my boss gave us all a book called Jesus Calling.  Her intention was that we read it each morning and take that portion of The Word to sustain us while teaching our preschool children.   It's a daily dated devotional book with scripture.   With all that goes on here each morning, the last thing I have time for is reading.  Shoot, some days I get all the way to school and realize I didn't put any makeup on, so reading?  Gah.  My boss, though, was very insistent that we at least give it a try.  So I did.  I mean, I've tried everything else in the morning.  Why not?  So the first day I sit my little two down for breakfast while the big one is upstairs claiming something is unfair and I quietly juggled one page of verse and thought.  The three of us at the table in our own little world.

If I'm going to read it, why not read it out loud?

And that's what I am doing.

It hasn't miraculously fixed our mornings, but at least they have that message to take them through the day if they choose.