Try as I might, I cannot get the lids off the Oil Pulling and Coconut Oil any longer.    I think I might have liked them, but my right hand is so freaking messed up now I could hardly push the vacuum today and couldn't hold the brush to fix my daughter's hair.   I am taking ibuprofen three times a day for the pain which isn't going to help my stomach ulcer, but whatever.    These might be the best coconut oils ever made but I wouldn't know, I can't access them and I refuse to hurt myself any longer to try.

So I have used the Facial Oil, the Body Butter, and, once, the Sugar Scrub.    I leave the lids just sitting on the top of those so I can get to them again ;).   Anyway,  I do really like the Facial Oil and the Body Butter.    They are oils so, obviously, they are oily which is not what I usually go with, but I like the smell and they make my skin soft.    The Sugar Scrub smells really, really good.    One of the suggested uses for it was as an additive to coffee or tea which is what I did,  it was good.   Would I do it again?   Probably not as it was way out of my comfort zone to put something that should be a body scrub into my drink, but it wasn't bad.     If I can keep the lid off it I may try it in the shower.   We'll see.

I was approached by skinnyandcompany.com about reviewing some of their all natural coconut oil products. 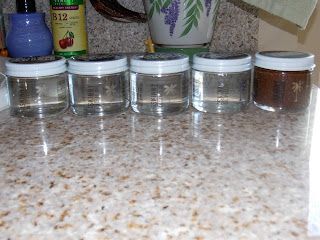 They all looked like this thirty minutes after I opened the box.   They don't look like this on the website so I don't know what happened, but what the heck?

I was very excited to try the body butter as I enjoy lotions and creams, but it was a liquid so I was a bit disappointed.  I don't know if it was supposed to be that way as the picture on the website it appears solid, but whatever.

I used the facial oil first.   It is infused with lavender essential oil and has a very nice smell, but I had to wash it off my face because I was so greasy.   It left my skin soft though.

This morning I wanted to try the oil pulling and when I picked the jar up I noticed it had a few solid droplets in it.   I checked the other jars and the facial oil was about half solid and the body butter was solid on top but liquid on the bottom.   I am not an expert on coconut oil or any other types of oil, but I found this a bit odd, but I can roll with it.

The little jars are so damn cute. 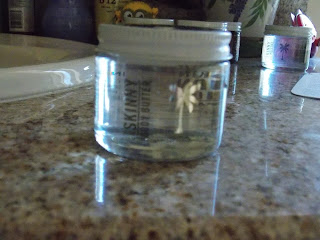 But MY GOLLY they are hard to open.   I tried to use one of those rubber opener helper thingies and it tore in half.   I was committed to trying the dang oil pulling though and eventually succeeded and in the process spilled a good bit on my granite counter.   Those jars have a big mouth, just saying.   I know they are trying to be all environmentally friendly but the neat freak in me would love to see some kind of easier, cleaner container, like I am thinking of putting this in an old ketchup bottle.

Anyway.......I can't tell that my mouth is that much cleaner after the oil pulling but it made me feel healthy and crunchy and tasted a heck of a lot better than the solid stuff I bought in the grocery store last year when I attempted that once before.   I am going to continue with it and let you know.

After my shower this morning I was happy to try the body butter now that it had semi-set up.    That was when I realized only the top was solid.   I got another big blob of oil on my granite again when I hit the liquid, but the solid smelled nice and I smeared it on my legs as an after-shave balm.    It wasn't what I was expecting, it was quite oily, but maybe tomorrow it will set up some more and I can get more of a lotion feel from it.   Stay tuned.