We were supposed to be in Breckenridge learning to ski but my husband "forgot" to make the plans.

If I want something done, I have to do it myself.   This is why the little kids and I will be going to be beach by ourselves in June.    There.

So two days into spring break and we haven't really done anything.   We cleaned the house and then the kids messed it up with a big fort and then I climbed into bed to watch MeTv and that's about it. 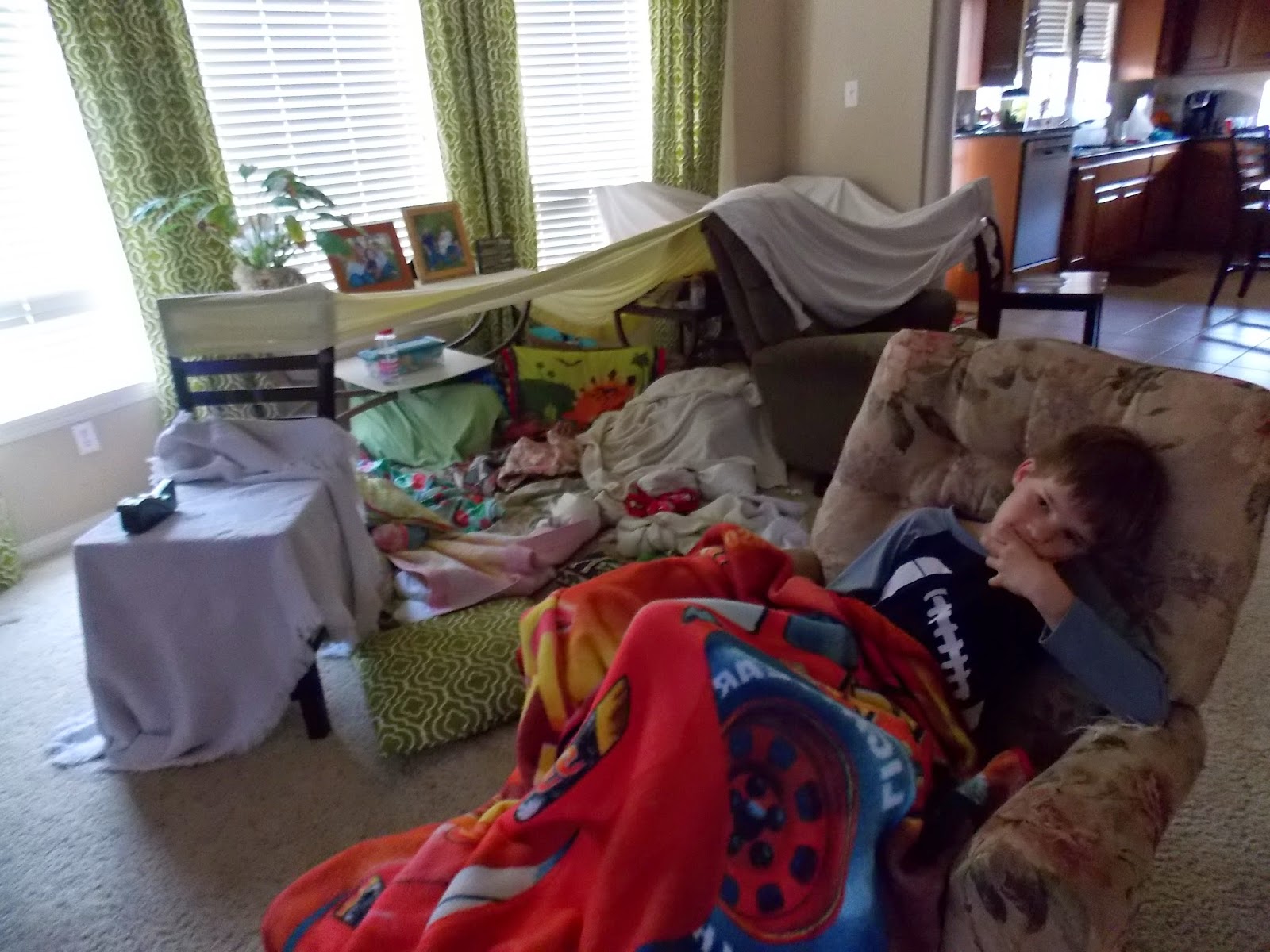 Oh, and Jacob ran away.

Oh yeah, we found him but not after getting the police involved and six hours of searching in the dark and after a Missing Persons file was created and logged and discussions of Amber Alerts being issued.

One morning he demanded asked for a new charger for that God-forsaken tablet the school issued and I told him I would give him half the $$$ and he could kick in the other half.   That did not go over well.   He then woke Adam and put him in a head lock, I guess in some kind of attempt to bribe me for it, so I gave him two minutes to get out of the house and walk to school (it was 6:45 am) before I called the police.

When he didn't return home at 4:15 I checked his LDC (Leadership Development Corps…..oh, the irony) schedule and he might have should have been at practice that afternoon so I figured that was what he did.   I don't' know why I would think that since he's skipped every single practice of the year, but, eh, I was hopeful.

When he didn't return home by 6:30 I started to wonder.    My husband figured he'd turn up when he was ready, I figured I need to call the police because what if something happened to him?   He thought I was being irrational but told me to call them if it made me feel better.   So I called them and he was all like, "You called the police?  Why?"   Whole other post there.

Anyway,  the police come and kind of brush me off as a crazy person but they go out looking for him anyway.   Between the call and their presence (forty minutes) my neighbor saw him on the trail in our neighborhood (I called her first) and went after him and he promptly skittered like a scared cat toward the road.   She yelled for my husband and he chased after him and then he ran across a five lane highway without looking both ways.    GAH!   Why do we even teach them these things?????

After that we didn't see him again.

The police came back four more times and after about four hours looking all over town, going into restaurants and stores and still not finding him THEY started to get worried.

By this time Derick was on his bicycle and would call now and then to see if he showed home.   No.   We live in a pretty big town.   Yes, it's a suburb of Houston, but it's big.    We're not in West Virginia anymore.

Eventually Derick called to tell me he found him in the neighborhood and made him come home.   So what did he say after all of that?    "I'm hungry".    The cops were informed and they showed up three minutes later, sat his ass down and very nicely reamed his ass out.    Seriously.   The policemen were awesome even if they didn't show up until forty minutes after I called.

This was a Wednesday.

On Saturday I asked my mother to come get him and take him home with her.   By then I'd had four panic attacks, one so massive I thought for sure I was having a heart attack.   My left arm started shaking on Thursday to the point I couldn't hold anything with it and my preschool students thought I was playing a game and would copy me.   On Friday my husband informed me he had to fly on a private jet to all of the plants his new bought-his-plant-out company owned and wouldn't that be SO. MUCH. FUN?   Oh sure, leave me with a flight risk for seven days.   No big deal.

I thought my mother would be helpful but she was mad.    She did come and get him.   With my dad.    And they spent an hour in my face telling me they should have taken him years ago, I was a terrible parent, I needed parenting classes years ago,  if I didn't get professional help for my mental illness she would take them all from me.

For the record I have been to four therapists/psychiatrists since Jacob's birth FOR MYSELF and all of them have asked my husband to come in and then they proceed to tell him that I am not depressed or anxious, that I need more help and support at home.     So there.

So off they went even though he had two more weeks of school.

Then she called me the next day asking if Jacob had exams and, by golly, he did so she came back and stayed in a Candlewood Suites until spring break started last Friday at noon.

I love my mother with my whole heart but these last two weeks listening to her tell me how absolutely awesome Jacob was for her has made me not really want to speak to her for a while.  Of course he's good for her.   She admittedly gave him all of his electronics back and without any restrictions.    She didn't make him bathe or brush his teeth or take his medications because THAT would be stressful for her.

Since the last time I posted we switched Jacob's medicine (again) to Strattera and some mood stabilizer of which I forget the name.   We went back for a two week check and she came with us.   She was MORTIFIED when he started yelling and kicking things and attempting to poke holes with pens in the furniture.   I almost had to leave the room when my mother told the doctor how he she'd never seen him behave that badly and the doctor says, "Oh really?   I was thinking he was actually behaving much better for me today"  Which he actually was.   This time he didn't greet her with his usual,  "Effing B*tch".  I guess he was trying to be good for his grandmother.    To her credit she would not let him have his games when we got to the car and she got another good show which prompted her to call me later to let me know how torturous this all was for an old woman like her.    Hmmmm.   Need some parenting classes?   Ah, but I digress.

He's at the lake with my parents for the rest of this week.   I told her to bring him home on Sunday and at first she was all like, oh no we'll go back to the hotel, but the last I talked to her it seemed she'd be bringing him home of Sunday.

I will not lie and say I have missed him.   I have not.   At all.    My kids got two weeks of waking up for school in silence.   We weren't late one time.   It was all very "normal" and we needed that.

I hope this break has been helpful for Jacob.   I would love for him to come back with a new perspective and attitude towards his family and his school work.   I am not expecting it and I dread what will actually happen, but it would be a nice change.

For now, we will enjoy the last of our spring "break".