Why Can't It Always Be Good 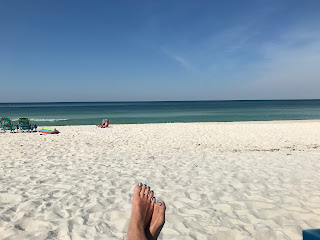 Why don't I live at the beach?   Why isn't this my daily view?

It's always so sad to leave our vacation.   Even if it did pour the first three days, it was fabulous.   Adam and Elizabeth slept until noon each day and Jacob wasn't even there.    Life was good.

I am trying so hard to stay away from him but it's hard when he follows me within six inches and screeches inappropriate words and hasn't changed clothes in a week...the smell, my lord the smell.

But my mother needs a break and there were things he needed to accomplish here:   thank you notes, college assessments, chores.   I would love to say he got right on that but, no.  We need to pay some fees to the glorified community college but he refuses to sign the agreement that allows us to access his account.   You know, because he's an adult and he doesn't want us in his business.   WHO came up with this shit?   I mean, how many just graduated seniors do you know that just have that money lying around to get it done?   Of course, I realize most of these adults are actually adults and know that if they want to succeed they need to pass the baton to THE PERSON WITH THE MONEY, but I live with a man-toddler who just wants to be an ass about it.   Yes, yes, I should let him fail BUT THAT IS WHAT HE WANTS.    If I don't pay, he doesn't go and HE DOESN'T WANT TO GO.    If he doesn't go, HE STAYS HERE and that is exactly what he wants.   His "Gap Year", his lazy time, his sit-on-his-ass-and-do-nothing-because-he-deserves-it.    Yes, I could stop myself right here and let it go but then I get to spend the next year doing the same shit I have been trying to get away from for the past 18.    I really, really hate the person who came up with the stupid agreement.