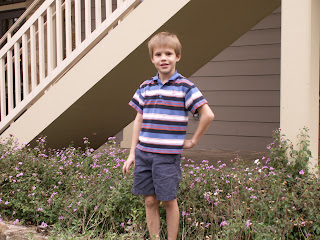 How is it you are eight years old already?

At 8, you are finally, as of October, 48 inches tall.  Too late to ride the big rides at Splashtown, but just in time for Disney!  You weigh about 42 pounds....still a wee baby even if you aren't a baby anymore.   I have a hard time buying clothes for you because you need a 7 length and a 4 waist.   We kind of split the difference with a five and you just don't wear pants too often.  You don't like the  adjustable waists and complain incessantly about the straps in your way.  Although you have a drawer full of pants, you only really wear about three pair of them.   You walked in the other morning wearing a pair of shorts with small holes all over them.  You wore them all day and it wasn't until I picked up the dirty clothes at the end of the day did I notice they were a size 18 months.   You'd probably still be wearing them if I hadn't gotten rid of them.

Your favorite color is blue.   Your favorite food is still Gammy's spaghetti but absolutely no meatballs or meat of you won't touch it.  You tried Buffalo wings a couple months ago and order those every time we go out.  Hooters are your favorite, but you'll eat any of them.    You like pizza lunchables in your lunch box with Lays potato chips and a Sunny D, but now that we are eating better you haven't complained about your slices of ham, cheese, sliced apples, and water.  Of course the yogurt comes home most of the time.

Your favorite show is Lego Ninjago.  I swore to all that's holy that we would not start another Lego obsession, but here we are.    Most of your Christmas toys were Ninjagos and that is what you have asked for your birthday as well.  I know you are waiting patiently for the coveted Lloyd mini-figure that I just happened to find not knowing how rare it was.  Too bad you opened all of your Christmas gifts (and your brothers and your sisters) two weeks before Christmas or you would have it by now.  Maybe next year you'll leave them alone.

You are in second grade.  Mrs. Anders is your teacher.  You were very sad when you found out you wouldn't be spending the year with Mrs. Smith, but I think you have learned to tolerate love her.   She and I have a system where she'll hold up her fingers to let me know how many demerits you've received that day.  You did really well in December, no fingers, but since school has started back there've been three a few times.  She says you're a sweet boy, you just talk, talk, talk all the time.  I guess we should be pleased since you really didn't speak until you were three and a half and we are paying for speech therapy, but still.  We are also paying for your education.  Please zip it and listen some okay?

Soccer is still your favorite sport, but you relented and let me sign you up for the winter football season since it won't interfere with spring soccer.  You complained until you found out your two best friends are on your team (surprise!) and you've really enjoyed it.  You ran for a touchdown on the last game and your coach says you are the best defensive player he has because you are so fast.  I wish you'd try baseball again, but you hated that because there was too much standing around and waiting your turn.  Maybe basketball?

You and Jacob have a hard time getting a long.  You now enjoy the same things and you both like to take the others.  I can't sharpie initials onto Legos so we have a daily issue about it.  I wish you both would realize if you just pulled them together you'd have so much more to work with, but we aren't there yet.  If I hear "He stole my red ninja!" another time I may just box it all up and take it to Good Will.  Which would suck because ya'll can really do so much with them, but still.  There's just so much I can take.

Elizabeth, on the other hand, is still your best friend.  As expected many years ago, when a little boy walked up to tell me one morning that he was Elizabeth's boyfriend, you told him he absolutely was not and he better leave her alone.  She will never date, I'm afraid.  You are a wonderful protector.   You have watched Secret of the Wings at least thirty times since Christmas because she always wants it.  I suspect you like it also, but you'd never admit it.  Ditto for Sofia the First.  I see you taking it all in.  You are eight.  You can still like princesses and Dinosaur Train, and Max and Ruby.  I'll never tell.

To me you will always be: 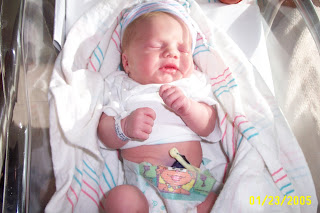 Happy Birthday to your sweet guy! I love that he loves his sister so much - what a great kid!

Wow-- when I started reading your blog he was only like 18 months. Time really does fly right on by.

I love that he ran off Elizabeth's boyfriend. That is the sweetest thing ever.