I just have to wonder.   What the hell goes through Jacob's mind?

He knows how to behave.  He was "normal" last Thursday and Friday.   He kept his voice down, he got his chores done, he cleaned up after himself, and even initiated conversation with us a few times.

I don't even know what happened today.

I am telling you, it's fricking insane here.

I had to put him outside.  AGAIN.  I had to disable our garage doors.   And the doorbell.

My mother bought us a book, as if we don't have or haven't read enough of them.   He apparently dug through my husband's things at some point because this is how he found it yesterday: 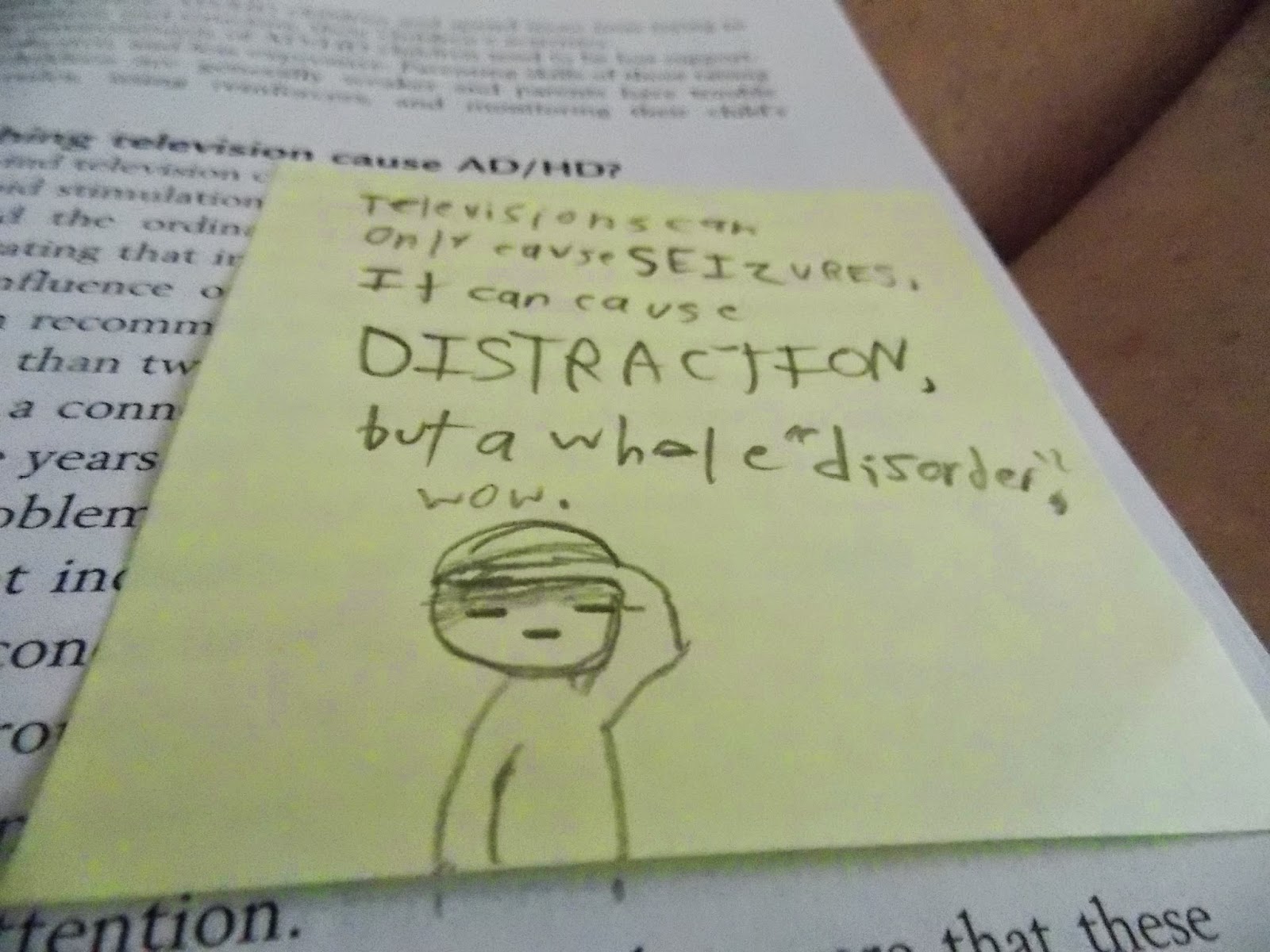 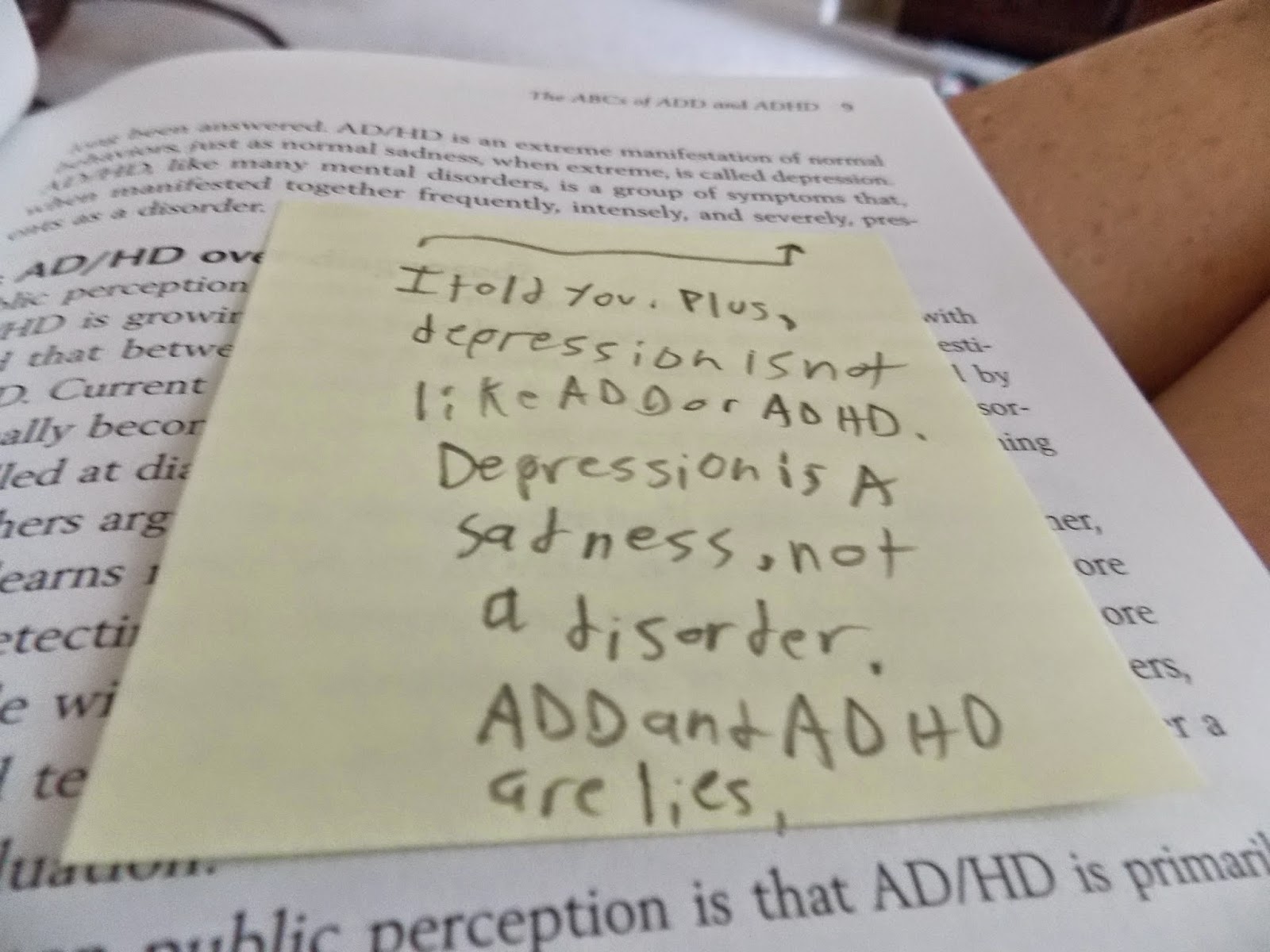 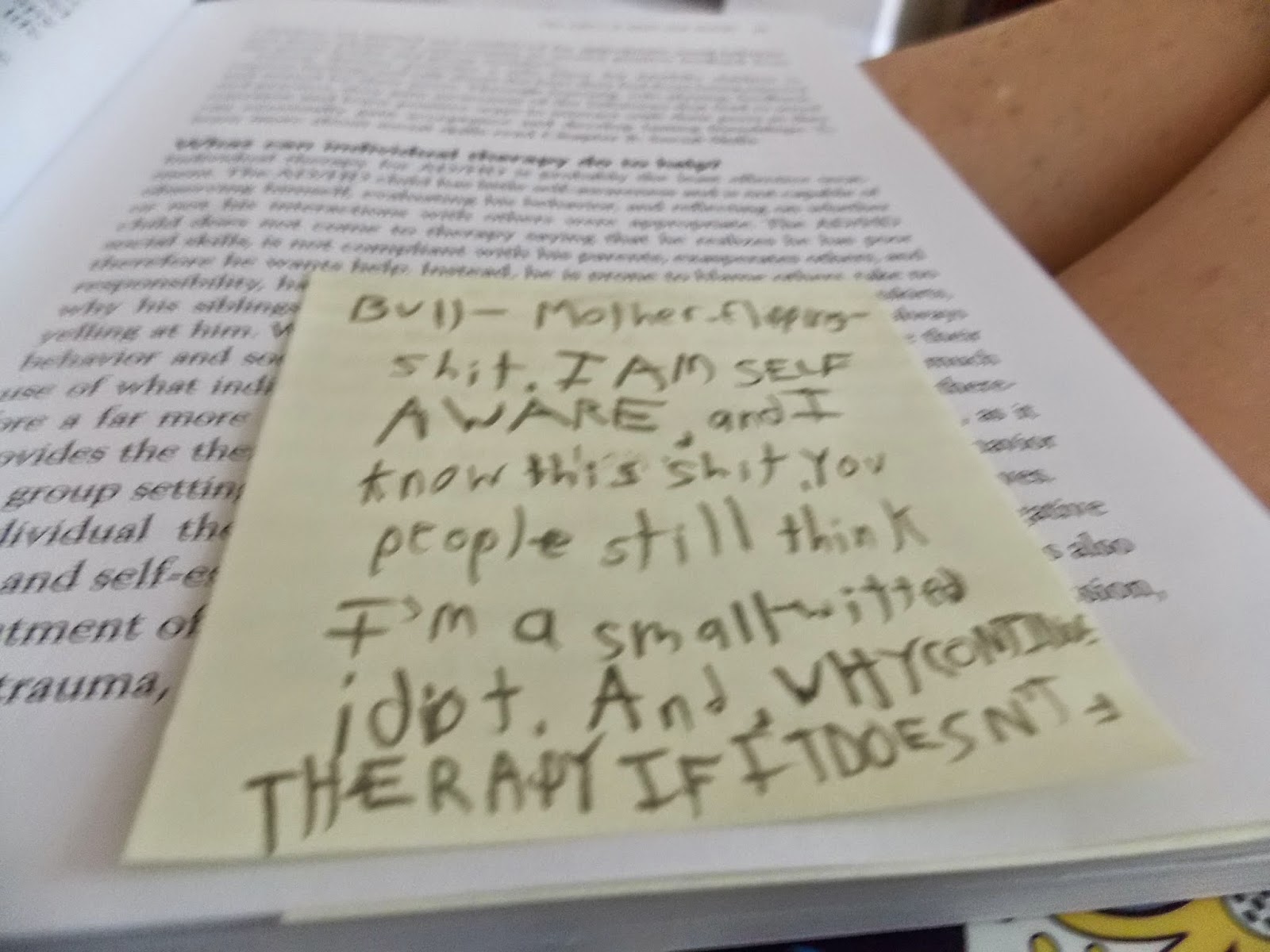 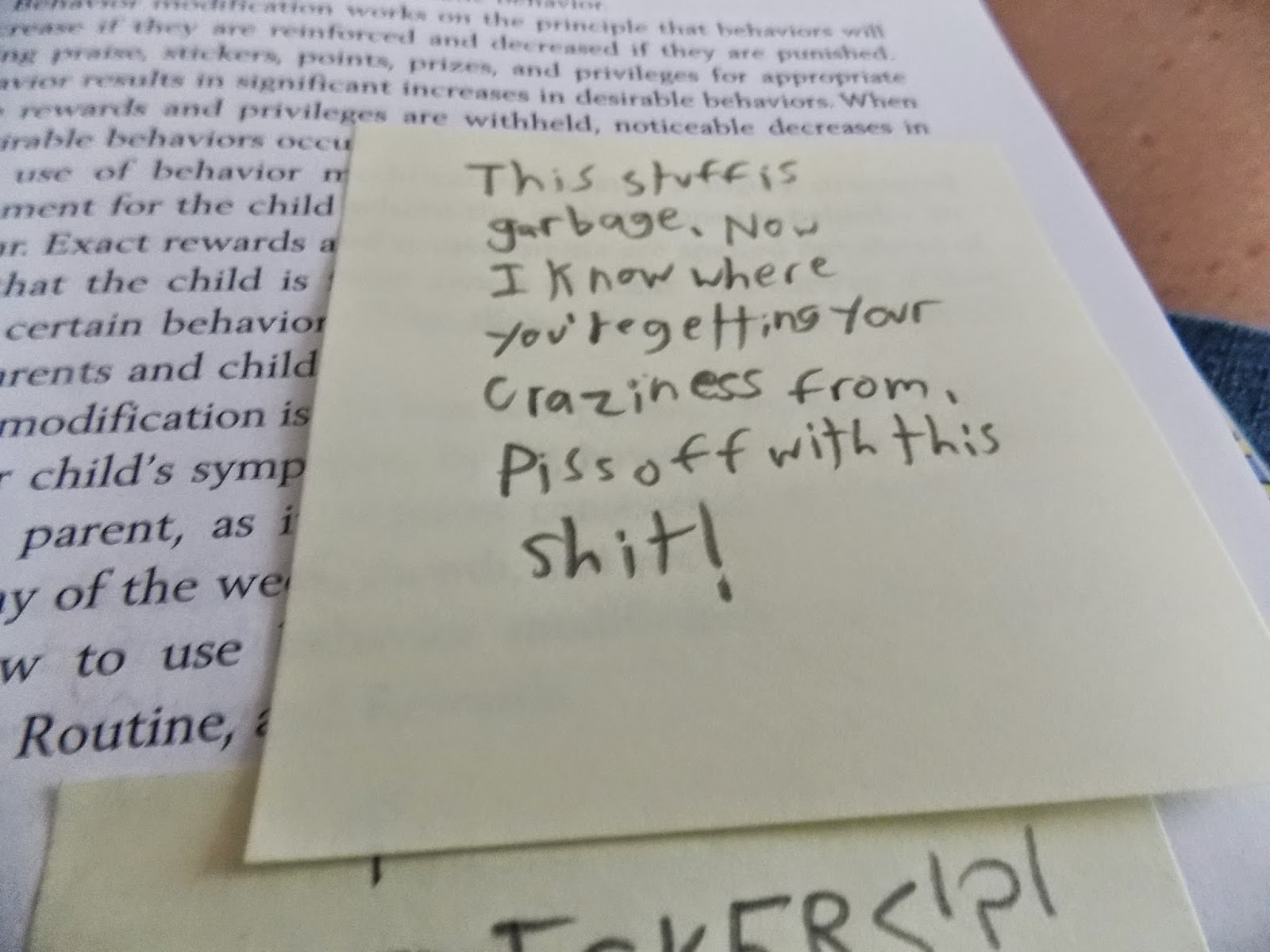 Way to steal my post-its.

I guess I should feel glad he was curious enough to check it out.   The vandalism I could do away with.

This actually points more toward a bipolar diagnosis as bipolar patiens do not think they have anything wrong with them that others are making it all up just to piss them off.   At least this is my synopsis from the things I have read and the time I spent with my mother-in-law.    She would also stop taking her medications.   Jacob, as far as I can tell, didn't have any today.

We couldn't find Adam's game this morning.   I had locked it in the safe a few days ago at Adam's request because he was just so tired of Jacob stealing it.   When I opened it today, it wasn't there.   I wracked my brain to remember if I took it out, but I know I didn't.   Adam went upstairs and found it underneath a shelf in Jacob's room.   Of course.   No wonder he acted like an ass and got his game removed.    Why behave?   He had a back-up.   That pisses me off, for sure, but the real problem with this is apparently he knows our safe code.   The safe that has all of our important papers,  emergency money, and Derick's guns.  I don't know much about that safe, but I sure hope you can change the combination.   How in HELL did he do that?

Elizabeth (because I didn't know how) had to install the Wii downstairs because Jacob spent so much time changing everyone's names to dirty words and erasing all of their accomplishments.    And really, I just don't want them to have to go upstairs around him anymore.

Since the contract did not work (no surprise there), I told him my next step was going to the school and talking with his LDC (Leadership Development Corps) Commander.   They have a creed they are to follow at all times and, well, he obviously isn't.  He LOVES LDC and has the opportunity to be a group leader and hold office next school year.    If Captain finds out he is behaving this way, that won't be an option any longer.   In fact, he may even be kicked out.   I would hate to do that to him, but I will.  I thought by actually putting him in this program he might realize I am serious, but so far, he doesn't seem to get it.   He needs to know I mean business.

I have a babysitter here tomorrow and the next day for ten hours while I relearn the same crap I learned when I got my degree, but hey, I have to do it, and, well, I won't be here.    If he pulls this crap while she's here, he's going to find out just how much business I mean.

Hey, it's Beth. I've just been catching up with your blog. Holy crow what a summer you've been having!
I have some unsolicited comments from reading through the past few weeks of your blog.
In my limited experience, not showering is a common spectrum/Aspberger issue. It must be so frustrating for you.
Also of course you have PSTD. Your whole family has it. J is putting you all into a war zone! Buying him too many toys as a baby is not the cause of this. I want to give a little smack for that comment. My eldest got lots of toys and he does not behave like J.
I am so sorry you are having to go through this. It sounds to me like you are living with a very intelligent child with a serious mental illness. Please consider talking to social services and trying to find a way to get him into this treatment facility. I know 20k is a lot of money but I am really worried about what is going to happen if he remains in your home. What is happening right now is just not good for any of you. It is ok to explore every option you can.
I keep thinking of this blog http://nomoremoves.blogspot.com/
Her child has been made a ward of the state and is in residential treatment.
We have been internet friends for over 9 years Andria. I really like you and am always here for you. I know what you have been through with J. I hope you can find a solution that keeps you and your little ones safe. (((((YOU))))