I Just Wanted to Squeeze One More Post Into October

We had plenty of uncostumed adults come around, and this year the added bonus of scantily clad preteens and teenagers. I mean, who buys naughty nurse outfits for their twelve year old? Really? 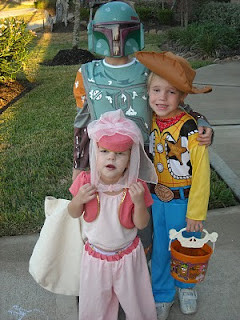 I did let Jacob earn a few houses with extra chores and a hundred sentences detailing his remorse for his crimes. I probably should've stuck to my guns and denied him, but I figure I only have a few Halloweens left with him and I know he wouldn't fit into that 75% off 2009 clearance costume next year.

When we returned home, the kids found a Christmas show deep within the DVR and are already making plans for the Christmas tree.

Does that officially make it the holiday season?

GREAT picture! I wish you a great week Andria!!!!

we did not have any of the scantily clad teens here... because it snowed!!

When we got home, we dug out the kids Advent calendars, since we fill them with the halloween candy.... so our Christmas stuff is all out too now, since the calendars were at the bottom of the boxes (of course!)

We had a Christmas commercial this morning. I laughed and laughed...

Love the costumes. I thought I was the only one that bought on clearance and tucked them away for a year! Guess not!