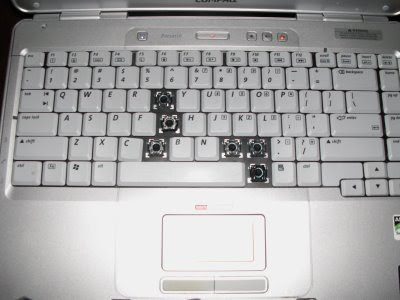 This is what happens when you leave your laptop open while you're scouring the house for your lost car keys.

Which, by the way, I totally found. Twelve hours later. Or more accurately, Adam found when he finally told me where he put them.

He had no idea all day long where those keys where. Even after I promised him a brand spanking new Optimus Prime if he found them, he'd just shrug and say, "Me not know!" and go about his business. Shoot, he even patted my back at one point and told me it would all be okay and all that time he knew where they were!

His story is that while I was drying my hair Elizabeth pushed a chair over to the counter and snagged my keys where I had left them when we came in the door. He knew she wasn't supposed to play with them so he took them from her and threw them wwwwaaaayyyy in the back of one of the kitchen cabinets so she couldn't find them.

Or anyone else either.

And I guess he forgot all about doing that until 9 p.m. when his Daddy asked him, after his own car key search, if he knew where Elizabeth put the keys when all of sudden he jumped up, went to the cabinet, and pulled them out.

My husband thinks I'm an idiot for not finding them and staying trapped in my house all day long while my kid rode home with a classmate at the last minute.

But he didn't find them either, so there.

But now I and my computer have keys again, so all is right with the world.

And as if I weren't lucky enough to have those all those keys back again, we went to a the company Christmas party this weekend without the children and we won a most awesome door prize 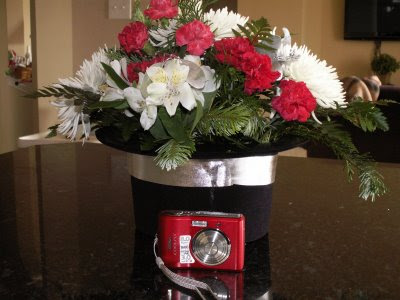 Those flowers are so pretty, huh?

But did you see my most awesome new camera?

We won a frickin' camera, man! It's a Nikon Coolpix and it's going to make me all cool like Ashton Kucher. Free = Cool.

And I also brought home a nice hefty hangover as well because forty year old Mommy can't drink like Twenty-two year old Girl-Without-Children could. The husband tried to warn me, but I don't get out much and they totally had an eighties cover band so the line between old me and this me was pretty hazy.

Note to self: Five beers is plenty. Seven will kill you the next day. And just don't drink at all if you have to drive eighty miles to a kid's birthday party the next day. Trust me on this one.

And now I need to spend the week baking and viewing the six hour defensive driving video before the end of the year so I don't get arrested.

I'll just be sure to close my computer and put my car keys away before I do it.

And there will be no drinking involved. I swear.
at 8:52 AM

Congratulations on both finding all the missing keys and the awesome new camera!

I just told my younger sister last night that before long she would start saying that she was getting to old to party like she used to, but she didn't believe me! We shall see!

Ha ha, funny, funny, boy you've got there!! =) And so smart to know to keep those keys away from his sister!! LOL

Congrats on the camera!! That is way cool!! One year at our work Christmas party, I won an iPod shuffle. Very cool! Those parties are awesome!! =)

I hear you on the drinking, hon.

Adam just didn't want to admit to HIM hiding the keys. As soon as someone else blamed his stinky sister, he was all gung ho...

Wait, did you really drink 7 whole beers? Because I am TOTALLY a lightweight if that's the case.

I feel your pain... we just got another new keyboard... because of... the boys.

Been there! My life is turned upside down when the stork brought my boys! That's why I blog to keep my sanity!

NICE CAMERA! And I'm glad you got a night out w/o the kids. Most important!!! :) Sorry about the hangover though. That sucks.

SCORE on the camera. I mean, the flowers are pretty and all..BUT A CAMERA? I can see plenty of cool new pics on the blog now.


Don't feel bad about the laptop. My son knocked mine on the floor and I thought all was good since it still worked.

The fan no longer works and it overheats so I have to keep shutting it off to cool down so it doesnt like explode or something.

That happened to us a couple months back except it was on Kevin's watch and not mine. It was HIS laptop too and you would have though the earth stop rotating on it's axis. Men!