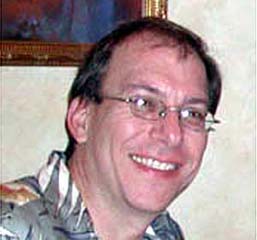 Alan J. Lederman was 43 years old on September 11, 2001. He just recently began a new job as a senior client specialist with Aon Corporation on the 92nd floor of the World Trade Center, Tower 2 and was living in Manhattan with his wife. When the first plane hit Tower 1, Mr. Lederman called his family to let them know he was okay and people were trying to leave the building, but he never did leave, as far as they know, because he stayed behind to help two women who were too afraid to go.

Just a couple of months before September 11, Mr. Lederman and a friend took a vacation to California in hopes of climbing Mount Whitney , the highest mountain in the continental United States. While his friend didn't quite make it, Mr. Lederman did. When he reached the summit, he signed the guestbook with "Where's the Snack Bar?" For a short time he was on top of the world.

I never met Alan J. Lederman. He was a name given to me to honor on this day, the fifth anniversary of 9/11. While I watched in horror at the events of that day, I could not fully understand what those families went through or the panic those people in the buildings and planes must have felt. I did not know anyone personally who perished in the attacks, but I look at this man's face and I wonder what he was thinking, what it was he said to comfort the women with whom he stayed behind, and did he ever try to get out of the building? I think these things and realize his family must struggle with those thoughts every day, their lives changed forever in one horrible morning.

My hat is off to Alan J. Lederman. He lived too short a life and will forever be missed by his family and friends and by one complete stranger who wishes she had the answer to all the questions.

Wow...It's so hard to believe that it all happened five years ago. I know exactly where I was and what I was doing when it happened...I'm sure so many other Americans are the same.

It's a moving tribute to someone who was lost, and thanks to you...not forgotten!

So very sad....every year I like to stop and reflect on this day 5 years ago, and realize how many lives were affected.

Thank you for sharing your tribute Mr. Lederman.

Thank you for sharing Alan Lederman with us. Something tells me he is still on top of the world....

Wonderful Tribute!
Thank you.
These are sad and hard to read....
I am honored to be a part of this project.
Mine is posted also...

The 2996 link is down. I have a new link on my site to view the participants.

thanks for doing a tribute and sharing your thoughts on that awful day.

My tribute to Saranya Srinuan can be found at http://retardedrugrat.wordpress.com

Like a lot of people, OneHung didn't know anyone personally who died in the WTC attacks. He does, however, know someone who worked there on that fateful day.

Tim had worked at the WTC almost since the day he graduated college. He was in the south tower the day it was struck. Like many other people, he had no idea what had just happened, but he knew it wasn't good.

Tim ran out of the building and one he got outside, he kept running...didn't know from what or to where, but he knew he was headed to someplace better than he was leaving.

Thank you for honouring Alan.

I participated as well.