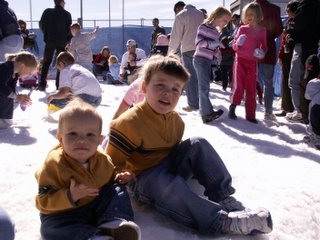 at the park, in a big pile with people all around to trample on you!

Here are the boys at the WinterFest on Saturday. I was looking forward to this all week long. We took Jacob a couple of years ago and he had a blast, loved the snow and the rides, and of course the snow cones! I couldn't go last year as I was having a baby so when I saw the signs I was ready! I found the kid's mittens and dressed them in sweaters and got up early and went out. Again, I forgot how much the town has grown in the past 2 years. It was chaotic. The snow patch was a mosh pit, I was afraid for the kid's safety honestly. They divided the snow into an under 6 side and an over 6 side, but that didn't happen. There were snowball fights, mostly between adults and it got pretty rough. One poor girl got smacked in the face HARD with an ice ball. I saw her later that morning and her face was red and cut. We stayed long enough to get 3 pictures and left. Adam wasn't impressed and Jacob stayed with Gammy and Grampa last year for a bit and saw real snow that this just couldn't compare to. He was more interested in the rides and jumping things so for 2 hours we waited in line for 3 things. It was a bit of a let down...we had such an awesome time the last time and although it was some nice family togetherness time, it just wasn't the same. It is also weird to play in snow when it is 70 degrees out.....my boys came home with sunburns and changed into shorts. Where is winter???

This morning was Adam's dedication at church. We had to postpone it since Derick hasn't been in town on a Sunday for a while. They scheduled it at the end of the service. Obviously done by someone without children. Adam did well though. He made it through the sermon and hammed it up with the pastor during his dedication. I swear, I have my own Leno and Letterman over here.
at 8:08 PM