Ya'll are so kind with your support to my burn out. I will have to say that the husband did take both kids to church on Sunday night, even Adam, while I watched Alton Brown roam the country and knitted until my fingers hurt. I am still tired and and a wee bit cranky, but it was a start.

What is the purpose of ABC Family Channel? When they say "family" channel, I assume I can find something appropriate to watch with my children. Don't you? I was flipping this weekend and saw Stephen King's It playing. Have you ever seen that? The one with the scary as hell clown in the sewer? Uh, yeah. Scares the shit out of adults, do I really want to sit down and watch that "family" horror flick with my five year old? It was followed by Sixth Sense. I see dead people. I sense stupid people at ABC.

I think we have a girl's name. Oddly, it wasn't on my list at all. Jacob just told me one day that he thought the baby was going to be a girl and that is what her name would be. I thought, well, that wasn't too bad of a name, and since we can't agree on anything else, as of now we are going with Jacob's choice. No, I will not tell you what it is. I am mean that way. It's not that I don't like you or want to share, but we're not sharing the names until we are absolutely sure, like when the birth certificate has been signed. I learned my lesson with the whole Paul debacle of 2005. Now if Jacob could just channel a boy name......

I have the insomnia again. It's kicking my ass. Mommy on no sleep doesn't equal happy mommy. Daddy is unhappy, too, because Mommy crashes in a heap before nine every night now and he would like for us to spend some quality time together, you know watching movies and playing board games...sheesh...and it just ain't happening. Ironically, when my eyes fly open at 1:38 am I am all up for playing an exciting game of Sorry, but I don't think he would be thrilled to play board games that late, or early, however you want to look at it. So, anyway, I pace the house or cruise the computer until I finally get sleepy again, like 4:30 and then two hours later it's time to start the day. Yeah, yeah, supposed to be getting you ready for those sleepless feeding marathons, but come on, this isn't fair.

I cried when I read about that poor Barbaro being put down. Why? I don't know. I am not even that particularly fond of horses but I am a sucker for animals, though, and it was just heart wrenching what all that poor thing went through.

This morning I am going to spend an hour observing my son in his classroom. I need to know what exactly it is that goes on there everyday before I make any decisions on first grade. I figure he will either act really, really good while I am there or really, really bad, but I think I can get some sort of gauge as to what he does there. You know I will update you on it. I am hoping it won't be as bad as it can be.

Adam had his two year appointment last week. I hate those. I gave in and caught him up on his vaccinations and he had no reaction to them at all. Jacob was always so sick after having his done. Another way they are completely different. Anyway, our pediatrician wasn't even concerned about the fact that he weighs as much as your typical twelve month old and is about as tall, I was suprised. She did, however, refer us to an early intervention specialist to have his speech issues checked out. She did say she thought his lack of speech was a choice at this point since he has no problem communicating in other ways, but better to be safe than sorry.

I just downloaded a bunch of Supertramp tunes. They are making me quite happy. I love me some Supertramp and, oddly, I have none of their albums.

And because I know you love the pictures....here's one I found from Christmas. 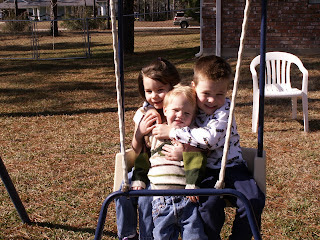 Gee...sure would be nice to see dry ground like that again.
at 7:33 AM

OK, the whole peanut butter/allergies thing: I CRAVED peanut butter while pregnant with both boys and ate it while breast feeding with both immediately after giving birth. I must have been going through some kind of protein thing because I.could.not.get.enough. Only one kid has allergies. There really isn't a connection. I think it's something they tell moms of kids with food allergies to make them think they are being "proactive" in trying to keep the next kid from having allergies. I.M.O.- eat the peanut butter and don't worry about it. I read "It" by Mr. King and had nightmares from that book (I was in my mid-twenties). ABC Family channel is maybe geared toward a more "dysfucntional" family. Thanks for the picture. Your boys are so cute! Sorry about the insomnia and wish I could send some of my snow your way:)

I HATE the preggo insomnia. Hope it goes away for you soon (before the uncomfortable sleeplessness begins...)

I know what you mean about the "family" channel. They often play movies that I would not watch with my family!

I read the same study about peanut butter and pregnancy, also my son's allergist told me about it when I was pregnant last time.

I've never heard about *not* eating PB when pregnant. I've heard it may not be a good idea while nursing if you have family allergies. I say, check with your OB if you have a concern, but you know how many studies are out there to freak you the hell out. My Mom smoke and drank while pregnant with me, and I think I turned out okay. Of course, I'm not advocating that, but you get what I mean.

Good luck with the sleeplessness. I had that with Landon and it SUCKED big time!

Ummm...maybe I would remember to use the past tense of "smoke" if she hadn't?? SMOKED and DRANK...lol!

I love that Jacob has named his baby sister. He won't come up with a boy name, silly, he already told you the baby's a girl!

I hope you can get some sleep soon.

I almost cried about Barbaro too. And I don't have pregnancy hormones racing through me. He had struggled so much and made it through the "crucial" time. It's really sad.

I wouldn't worry about your husband. If we wants to spend time with you so much, he could always change his sleeping schedule to your sleeping schedule??? Peanut butter is so yummy! If you really want to eat something good, buy some Twix candy bars and dip them in the jar. That will really settle your cravings!

I feel your pain. After three kids, I've finally come to the conclusion that I will only get decent rest when they are grown and gone.

Then I realize they'll start dropping the grankids off then.