It's a circus around here... 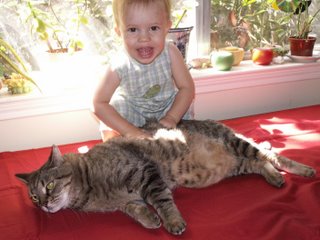 Well, the table is a big hit with the wee folk in the house. It's so much bigger than the last table, I actually pushed it up against the wall creating a sun spot for Phoebe and she doesn't budge from it. Even through all the "love" she is getting from these boys, who rarely see her emerge from her darkened hole, she sticks around. I can't keep Adam off of it and Jacob already has puzzles and board games stretched out all over it AND with that we still have room to eat on it. Derick doesn't know of all that conspires at the table while he is earning our living all day. I must delete these pictures before he finds the evidence.

I baked a cake yesterday.....from scratch. I am typically the cake mix kind of cook, but I found a good recipe and decided to go for it. I took it out of the oven and out of the pan to cool on the counter and went upstairs to do some laundry and, yes, cruise my blogs. Adam was asleep on the couch and Jacob, well I guess he was drawing in front of the tv. Jacob kept asking for some of that cake and I wouldn't let him have any, so when he called up and said "I think someone took a bite out of the cake, can I have some now?" I just thought he was working it, thinking I would give in and give him some. So, I went downstairs and sure enough, someone had taken a bite out of that cake........three fourths of it was missing and crumbs were scattered as far as the eye could see and sitting on the rug with a guilty look was Ezra, my dog...NO, Derick's dog! Damn dog!! He already has the cushiest dog life in the state of Texas and he wants my cake too! For lack of a better euphemism...he is in the doghouse today! It is actually quite hysterical, he will suck up to me, give me those puppy dog eyes, but I won't be swayed. No sleeping on the couch today dog!!!
at 11:44 AM

yeah, the dog would be most definitely be in the doghouse if that happened over here!

and since the dog enjoyed your cake creation...do you think you would mind sharing what you baked from scratch? homemade cake sounds pretty yummy about now!

It was just a spice cake. I found the recipe on allrecipes.com. I had some yogurt about to go bad so I plugged in yogurt and that was what I found. It was extremely easy and I think the dog liked it.